TOUR TO SAN JUAN 2020: THE ARGENTINE CYCLING PARTY WAS PRESENTED 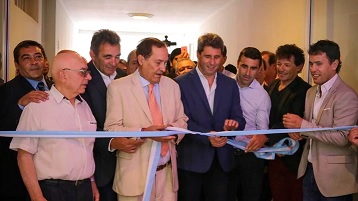 SAN JUAN, ARGENTINA. The event that took place in the brand new facilities of the San Juan cycling venue, the participating teams, their figures and the stages that will be part of a new edition, number 38 °, were announced.

The meeting was attended by the governor of San Juan, Sergio Uñac, the provincial sports secretary, Jorge Chica and various local and national cycling leaders, among which the Olympic champions Juan Esteban Curuchet and Walter Pérez stand out, together with Maximiliano Richeze among others .

San Juan will be the first UCI Pro Series competition in the history of cycling, the new category generated by the International Cycling Union with the aim of strengthening the position of the discipline among the greatest professional sports in the World.

By calendar, Argentina will have the honor of being the first and San Juan, will house the second most important category in the world, a fact that positions the Tour among the best races on the planet.

24 teams of 7 cyclists will participate each. Six are World Tour, first category of World level. The German team, BORA Hansgrohe will arrive in San Juan with Slovakian Peter Sagan as a figure. From Belgium he will disembark the Deceuninck Quick Step, top winner of the year 2019 that will run with his two figures, Julian Alaphilippe and Remco Evenepoel.

The UAE Team Emirates will compete with the dynamic duo Fernando Gaviria and Maximiliano Richeze, while the Israel Cycling Academy will debut in the top world class in the Province of Cuyana. On the side of the Movistar Spaniards, they will run for the third consecutive year, while the French Cofidis will do it for the first time to San Juan.

Five will be the Continental Professional category teams. Three are from Italy. EL Bardiani CSF, Androni Giocattoli and Neri Sottoli. Euskadi Foundation will be added from Spain, while from the United States, the representative will be UHC Cycling Rally.

Four selections will be added to the payroll of 24 teams. The local, Argentina, Russia, Italy and Uruguay.

The Vuelta San Juan was positioned as one of the best on the calendar and will also be enhanced with an inclusive competition, the “Sagan Fund”. Race with part of bike tour open to all audiences of which several of the Vuelta figures will participate, including one of their mentors: Peter Sagan, European cyclist figure of the World tour and three-time world champion. (infabae.com)