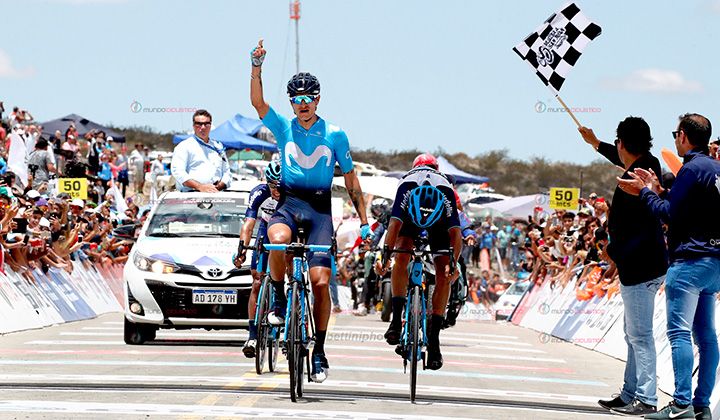 SAN JUAN. With the impeccable victory of the Colombian Winner Anacona (Movistar Team) in the Queen stage of Vuelta a San Juan, the fifth day of the San Juan round was held today. The Boyacan who attacked 12 kilometers from the finish line, with his victory is the new leader of the race thanks to the impeccable work of Movistar Team controlling the group. The national prominence was accompanied by the great performance of Team Medellín, which placed runners Nicolás Paredes and Cristhian Montoya second and third respectively.

“It was a great team effort, I am very happy to have responded to the confidence they have given me and to have won here. This year the purpose was to raise my arms again, I have done a good preparation and we are seeing the results. Today was a day that we had to take advantage of by being on top we could give ourselves well and I launched an attack to select, but fortunately it reached me to goal. ” Anacona affirmed after his praiseworthy task in Alto Colorado.

In addition to the brilliant victory of Anacona in the final shot and the second and third place of Paredes y Montoya, it is worth noting the location of 5 Colombians among the first 10 of the stage and 3 in the Top 10 of the General. Stage in which the leader until today Julian Alaphilippe (Deceuninck-Quick Step) entered in the position 14 to 57 seconds and now is second in the general to 41 seconds of the “Beetle” winner.

This Saturday will take place the sixth and penultimate stage of this test, a circuit at the Autodromo El Villicúm on 153 kilometers. (mundociclistico.com)