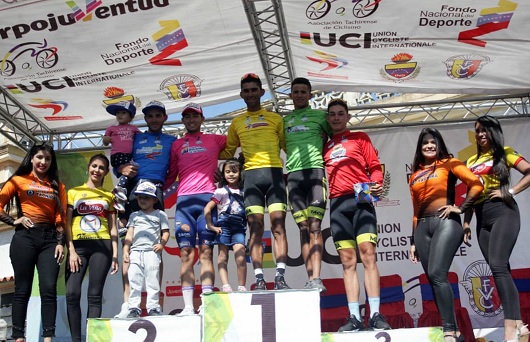 CHRIST REY, VENEZUELA. Venezuelan cyclist Luis Mora (Bolivarian Government of Carabobo) has won the seventh and penultimate stage of the 54th edition of the Vuelta al Táchira en Bicicleta, a day of 112.3 kilometers disputed on Thursday between the Venezuelan town of Ureña -and the height of Cerro Cristo Rey.

With a time of 3 hours, 12 minutes and 16 seconds, Mora prevailed in the arrival to the Cerro Cristo Rey in front of his compatriot Jimmy Briceño (Alexander’s Investments), with which he reached the finish line. The third place, 42 seconds behind the lead duo, was taken by the Colombian José Serpa (GW-Shimano).

With his second place Briceño assaulted the leadership of the tachirense round that commands in the absence of the dispute of the last stage.

The penultimate stage, started in the hot border city of Ureña, with a circuit that moved to the town of San Antonio del Táchira, three circuits that presented attacks by important units fighting for the championship in the department of the fastest .

Five cyclists managed to separate themselves from the leader’s group. The quintet was formed by José Serpa, Wilmen Bravo and Jackson Rodríguez (JHS Group), Jhon Navas (Lotería del Táchira) and José Alarcón (Government of Miranda Treck), who put emotion to the first 80 kilometers of the queen stage.

When leaving the flat ground, the car of five began to raise towards Peracal where Wilmen Bravo and Jackson Rodriguez lost the wheel. Shortly after, while Jhon Navas stayed, José Serpa and José Alarcón faced the mountain terrain alone.

But in the peloton where the leader Ronald Gonzalez came he witnessed an attack. The son of Barinitas, Jimmy Briceño, with Freddy Vargas (Alexander’s Investments) and Luis Mora (Carabobo), jump out of the group, where Gonzalez reacts but can not follow the strong pass imposed by the hat trick that pursues the duo on tip of career.

With a constant pedaling Jimmy Briceño moves away from the leader to more than 1 minute, immediately assailing the yellow shirt to the aurinegro cyclist, but when steeper the route was made Freddy Vargas loses the step of his partner and Luis Mora.
Very close to the arrival, Briceño and Mora ascended to a strong and constant step, leaving behind their rivals, taking center stage in the climb to Cerro Cristo Rey, where they left on the road the mercenary Alarcón and the Colombian Serpa, who was fighting to continue in the dispute of the stage.

In the last meters to reach the feet of Cristo Rey, Luis Mora raises his arms in victory, for the great effort made in a stage that was transcendental in the individual general classification.

The Vuelta al Táchira will conclude this Friday with the dispute of its eighth and final day, a stage of 115.2 kilometers in the Santos Rafael Bermudez Circuit.

A total of 125 cyclists from twelve national squads and ten foreign teams compete from last January 11 and until the next day 18 the `Vuelta Grande de América ‘, where Pedro Gutiérrez, victor in 2018, will fight to win the trophy. (esciclismo.com)