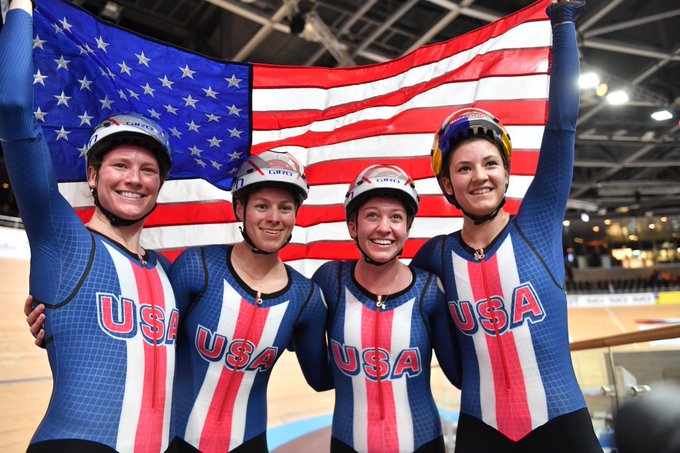 The quartet of the United States of America confirmed today the predictions shown in the previous day during the qualifying round and was awarded the gold medal of the Team Pursuit test during the second date of the World Track Championship that takes place in the German city of Berlin.

Chloe Dygert, Jennifer Valente, Emma Whithe and Lily Williams demonstrated their power and convincingly surpassed their similarity in the final in Great Britain, their time of 4: 11,235 was superior to 4: 13,129 of their rivals.

With this result, the women of the stars and stripes team strengthened their classification to the Tokyo Olympic Games, before this result they were sixth in the ranking of specialty nations, and they will obtain the ticket the 8 best, the Canada Quartet that marched in position 4 also remained in the classification zone to obtain that same position today when it fell defeated by Germany during the discussion of the 3rd and 4th places.

At the close of the World Championship, the UCI will close the rankings of the Olympic classification and it will become official to obtain places

In the same test of the men’s sector, what was the most spectacular thing that has happened in these first two days was experienced, the team of Denmark in a more than transcendental performance managed to pulverize the World Record on the 3 occasions that came out Berlin velodrome track.

The Danish steamroller formed by Hansen, Johansen, Madsen and Pedersen began the work yesterday by marking 3: 46.579 during the qualifying round and leaving behind the 3: 48.012 that the Australian team had set at the World Cup in Poland 2019.

Yesterday also during Round 1 they again lowered the primacy and stopped the clock at 3: 46.203. Then everything was ready for today’s grand finale where they spectacularly defeated New Zealand with a score of 3: 44.672 to close the string of records and improve in almost 4 seconds the record that existed before the fair.

In the rest of today’s results, the Nederlands   Harry Lavreysen obtained the gold medal in the Keirin for men test where the representatives of our continent, the Colombians Kevin Quintero and Santiago Ramírez as well as the Venezuelan Hersony Canelón failed to pass the first round; and manly Scratch saw how the Belorussian Yahueni Karaliok obtained the gold metal, in this test the North American Adrian Hegyvary finished sixth and the Mexican Ignacio Prado eighth.

Tomorrow the third date of the World Cup will run and we will have finals in Individual Speed ​​and Omnium for ladies and Kilometer against the clock and Individual Pursuit for gentlemen.