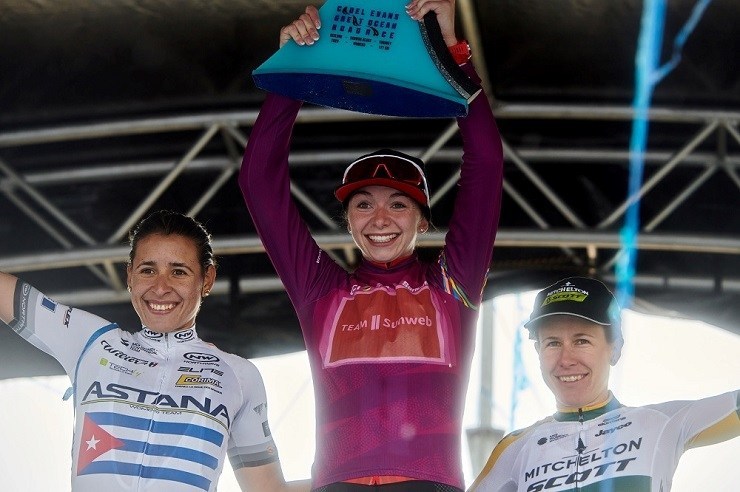 Arlenis crossed the finish line just 15 seconds behind the winner, Germany’s Liane Lippert, of the Sunweb team, who scored 3 hours, 17 minutes and 46 seconds at 121.5 kilometers on a circuit in Melbourne.

The local Amanda Spratt, of Mitchelton Scott, and the American Tayler Wiles of Trek-Segafredo passed the sentence line with a similar difference.

Of the 82 cyclists who took the start, 24 left, several of them due to falls on a day that, after the first 20 kilometers, was characterized by constant rain and overcast sky, according to JIT’s own Sierra de Manzanillo.

“I could not repeat the triumph of 2019, but I am very happy and happy, thank God I had a lot of strength, the whole race I concentrated on the hope of a good performance and I never felt alone,” he said while thanking the effort of their companions as far as they could.

Among the 58 who finished the demanding stretch, with intermediate springs and mountain awards, the other best located by the Kazakh team Astana was the Italian Katia Ragusa, sixteenth one minute and 24 seconds from the young German.

Much more behind the Ukrainian Maryna Ivaniuk, 7.34 minutes and also the Italian Francesca Pattaro 10.01 in the race that the winner averaged 36.9 kilometers per hour.

The Mexican Lizbeth Salazar was one of those who rolled to the pavement by getting involved in a sharp fall and had to retire.

“The complete team of the winner was advancing on the tip and one by one they began to jerk about seven kilometers from the goal, the last one was Liane, she managed to take off and her companions did not fall back, they wanted to hold the squad,” explained the West Indian combative.

“But Amanda” jumped “from the lot, Tayler followed her and they separated, nobody looked for them, then I went to the side and I reached them, but the German came forward and with advantage, I felt good, I knew I could conquer the podium and we launched the final sprint, ”he said.

This was his penultimate competition in Australia, before he was sixteenth in the four-stage Santos Tour Down Under in Adelaide and tenth in the first in Melbourne, the Torquay Race, category 1.1 circuit of the International Cycling Union (UCI).

“However, this was the most important, it has a World Cup level, so I feel this second place as a triumph,” said the road champion of the 2011 Pan American Games in Guadalajara 2011 and Lima 2019. They followed the four toes – 21 seconds behind the leader – Canada’s Leah Kirchmann (SUN), Australia’s Chloe Hosking (RLW), Americans Lauren Stephens (TIB) and Ruth Winder (TFS), and hosts Ella Harris (CSR ) and Brodie Chapman (FDJ). The last race on the mainland of the Kazakh club based in Italy will be on the 5th and 6th of this month at Melbourne itself, called Lexus of Blackburn Warrior Herald Sun Tour.