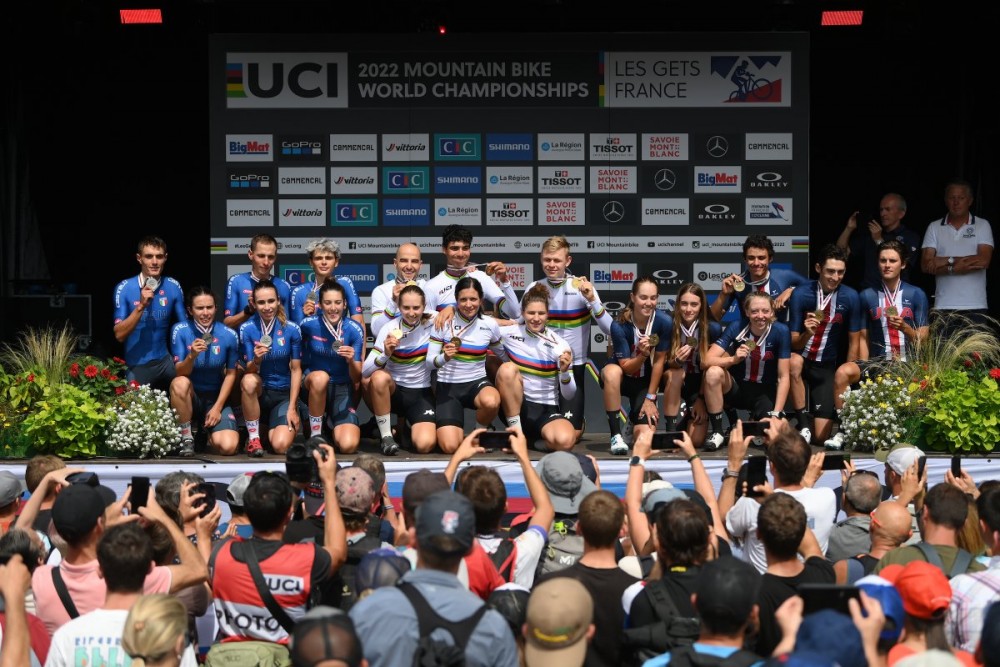 Switzerland was proclaimed this August 24 Team Relay World Champion 2022 in the Les Gets World Championship, escorted by the representation of Italy and the United States, silver and bronze, respectively, in what constituted for our continent the first medal in this competition. universal MTB.

The comeback of the alpine country began, after a fall of the French team, in the middle of the race with the under 23 cyclist Ronja Blöchlinger, continued with the junior Anina Hutter and finished off by Nino Schurter to show that it is still the best team in this modality.

The team relay event has once again brought us an exciting event in which 6 cyclists per team and 6 laps in total have left Switzerland as the most powerful country in this specialty.

In the first lap, Italy was the fastest with a Luca Braidot in front that left his team with a margin of 20 seconds over the rest. Behind, Adrien Boichis, French Under 23 cyclist, made a great performance to stay second along with the powerful Chris Blevins of the American team.

France’s junior cyclist Alexandre Martins managed to put his team first on lap 2, 20 seconds ahead of Denmark, who rode Oliver Solvhoj (under-23). Loana Lecomte kept France in the lead during lap 3 and increased the lead to 40 seconds with her first pursuer, Italy. But there was still a long way to go and great heavyweights to compete.

It was not until lap 4 when Switzerland entered the podium positions for the first time, the sub-23 Ronja Blöchlinger left her team in second position with more than 1:30 minutes of difference with respect to France, who was still leading so sign.

The race took a big turn on lap 5 when junior Anina Hutter continued the comeback from Switzerland to put her in first position. Italy, with the also junior Giada Specia, jumped to second place with a difference of 7 seconds.

And Haley Batten recovered positions for the United States leaving her third with 15 seconds and a lap to go. For its part, France, who ran that penultimate lap with the junior Tatiana Tournut, moved up to seventh place with more than 2 minutes lost due to mechanical problems.

It was Nino Schurter’s turn for Switzerland and he started first on the last lap. Although the Italian sub 23 Simone Avondetto held the type well in the final lap, he could not do anything for Nino Schurter to reach the finish line first with a punctured rear wheel.

Switzerland was proclaimed Team Relay world champion for the eighth time and remains the team with the most victories in the modality, followed by France with six. The other representation of America in this test, Canada, finished seventh.