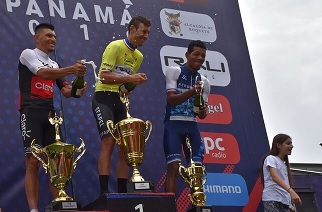 CITY OF PANAMA. The Uruguayan cyclist, Fabricio Ferrari, was the winner of the Panama TRour 2019, whose seventh and final stage was run this Sunday.

Ferrari, who participated with the Rali Stori team, assured in the stage the leadership he obtained on Saturday after displacing Albeiro Sauza, who began the general classification of the event from the first fraction.

The Colombian Stiver Ortiz (Rali Claro), culminated in the second place of the general classification with time of 19 hours, 24 minutes and 17 seconds. The third place went to the Panamanian Cristhofer Jurado (Aeronaval), with registration of 19:24:19 hours.

Ortiz was the winner of the final stage with time of 2 hours, 23 minutes and 20 seconds.

The route was 101 kilometers away, which included the communities of La Mesa de San Martín, Comando Real-Paranal and Cerro Azul, in the eastern sector of the province of Panama.

Jury was awarded the two flying goals on the final day of the 2019 Panama Tour. (Press Copaci)