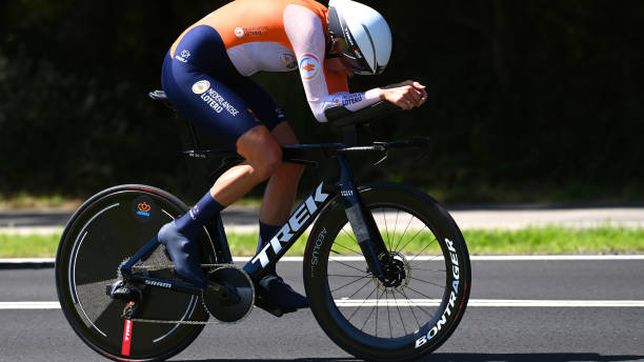 The Dutch Ellen Van Dijk became the first champion of the Wollongong World Championships, winning the elite individual time trial (f) for the third time in these events, a test in which the American Leah Thomas was the best performance in America with a fifth place, identical place to the one reached in 2018.

The surprise was about to jump in the first round of the World Championship, because the Australian Grace Brown signed a great performance that made her virtually the holder of gold during almost the entire competition until only an imperial like Ellen van Dijk, who started last , beat Brown at the finish line, who played with the advantage that she did not have to adapt to the strong time change suffered by the rest of the runners. The Swiss Marlen Reusser completed the podium.

It was not long to wait to see the first great reference time, since the Australian Brown, who started in the first block of runners, flew at an average of 45.7 km / h. The Australian sat in the ‘hot seat’ with tremendous differences over other great favorites, such as Lotte Kopecky who was second at 1:37. Alarm bells went off, in favor of Brown’s victory, when one of the main contenders for gold, Annemiek van Vleuten, was almost half a minute behind at the first intermediate point.

The wind, with gusts of up to 24 km/h, blew against the runners during some parts of the route, which perhaps affected a cyclist with a climbing profile like Van Vleuten more and played in favor of Brown, a great connoisseur of the terrain that In addition, he filed many seconds in the technical zone of curves taking risks.

With the Dutchwoman third at the penultimate checkpoint, no more and no less than 1:14 off the record set by Brown, it only remained to be seen whether Reusser or Van Dijk were capable of beating her. Annemiek’s legs were not the same ones with which she won La Vuelta seven days, as she stated: “Unfortunately, by far it was not my best day on the bike. I have no idea why I didn’t have the power that I normally have in a time trial.

Brown promised them very happy, signing autographs and giving smiles to the fans from the privileged position of the ‘hot seat’, but right at the end the tables were turned… Reusser improved Brown by 1 second in the first intermission, which culminated on a slope that could make Van Dijk suffer, less prolific in that field.

Nothing could be further from the truth, since the Dutchwoman beat the Swiss mark in almost 9 seconds. In those last kilometers of arm wrestling between the two, the gap opened up in favor of Van Dijk, so much so that Reusser ended up giving up a silver medal that she held in her hand for a few minutes.

Exultant, despite the enormous effort that had to be used, in the end (he only beat Brown by 12 seconds), Van Dijk prolonged the dominance of the Netherlands in this discipline, with five golds in the last six editions.