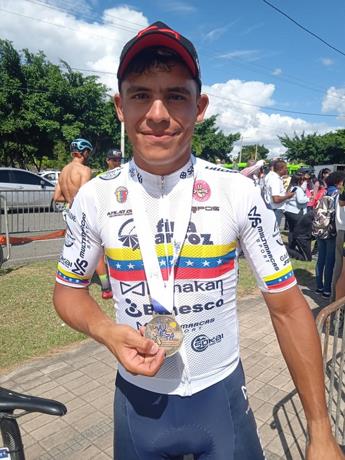 The Venezuelan road champion, Luis Gómez, conquered with a powerful sprint the third stage of the XLIII Vuelta Ciclista Independencia Nacional run this Wednesday with the Santo Domingo-Cumayasa-Santo Domingo section, of 168 kilometers.

Gómez (Arroz Fina-Banesco) prevailed in the massive race over the also sprinters, the Mexican Alfredo Rodríguez (Best Buddies Racing) and the Dominican Jonathan Ogando (Aero Cycling Team), with a time of four hours, 11 minutes and 27 seconds, an average speed of 36.66 kilometers per hour.

After crossing the finish line, Gómez thanked the support of his teammates and his sports director, the Venezuelan Miguel Ubeto, former winner of the patriotic round.

“We knew that we had to take advantage of the efforts of the VFT that did not let anyone escape, especially the Honduran Fredd Matute, who was one of the most combative of the day,” said Gómez.

Also standing out in the mass arrival were Ricky Morales (Corratec La Vega), the Dominicans Jesús Roniel Marte (INTEJA-IMCA-CAT) and Rodolfo Puello (Team La Romana), who ranked from fourth to sixth position, respectively, with the same time as the winner.

With the masterful work of the Voler Factory Team, American Cole Davis kept the lead jacket, followed by Colombian Brayan Gómez (Best Buddies Racing) who has the same time of 12:41:55. The Venezuelan César Sanabria (Fina Arroz) is third, nine seconds behind the first place.

From fourth to fifteenth place there is a tie of 10 seconds, standing out the Dominican Nelson Ismael Sánchez (Corratec La Vega) who is in box number 10.

For his part, the Colombian Anuar David Castillo (Gespron Evolution) retained the blue U-23 leader’s jersey with 12:42:05 hours, escorted by the Venezuelans Yohandri Rubio and Jhonny Araunjo, both from Fina Arroz- Banesco, with 37 seconds and 1:54 minute, successively.

The Honduran Fredd Matute (Herrera Sport- Sportswear) who was accompanying Borstelmann in the breakaway, but faced mechanical problems with 10 kilometers to go, is the mountain leader with 10 points, followed by the American (8) and the Colombian Rubén Acosta (Herrera Sport), with three units.

Matute, in addition to showing that he is one of the most combative in the patriotic round, leads the line of flying goals with 12 points, followed by Luis Gómez and the Dominican Adrián Núñez (INTEJA-IMCA-CAT), both with five points.

The Colombian Javier Moreno (Herrera Sport) is the leader of the Sub-23 with 04:06:21 hours, followed with the same time by the Venezuelan Johnny Araujo (Arroz Fina-Banesco) and Anuar David Castillo (Gespron Evolution), second and third, respectively.

The Herrera Sport-Clothing Sports team leads the team classification with 12 hours, 19 minutes and three seconds. The Best Buddies Racing and the EDA-Good Bike-AC Training are second and third with the same time of the Colombian squad.

With his second place, Alfredo Rodríguez went on to lead the regularity category, with 40 points. In that same section, David Cole stands out, with 39, and the winner of the second stage Brayan Gómez, with 35 points.

The fourth stage will take place from Santo Domingo to Samaná over a distance of 178 kilometers. The starting point will be the Ministry of Sports and Recreation (MIDEREC), at 9:00 in the morning, and will end on the boardwalk of that peninsula. (Molivo).