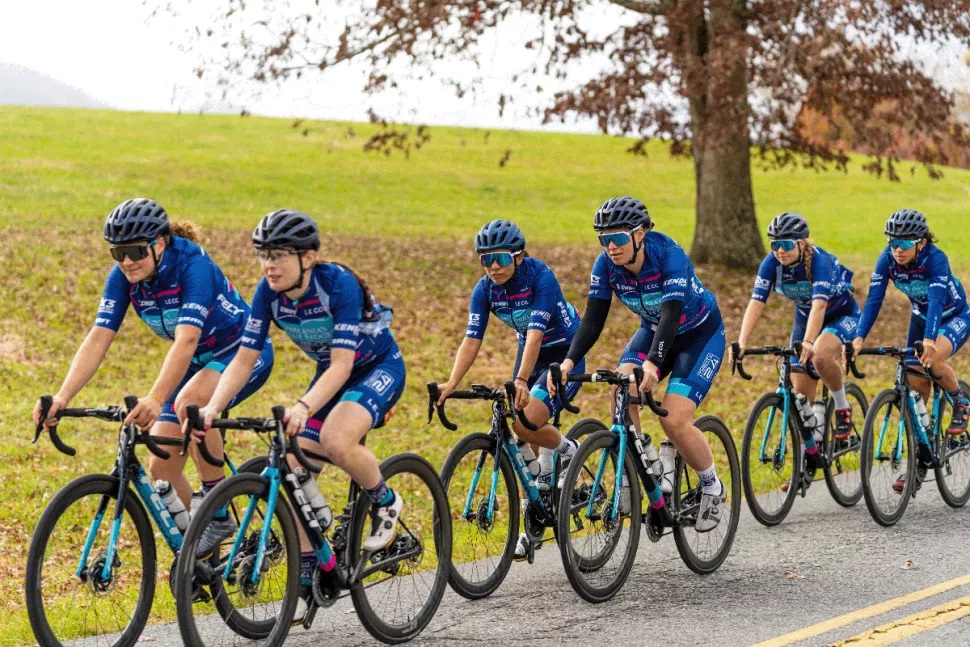 Virginia’s Blue Ridge TWENTY24 has announced an intent to return to the professional ranks, having applied for a UCI Continental Team licence in 2023.

It is one of the most successful development teams in the world, led by General Manager Nicola Cranmer and Director Shelley Olds, they aim to compete at the highest level of road racing in the US and possibly South America or Europe while maintaining their commitment to track, mountain biking, gravel, ultra, eSports, and para-cycling.

“To race in North America, you really don’t need to have a UCI licence at the moment, as there are only two UCI races, but with our new partnership with Visit Virginia’s Blue Ridge and the Virginia Tourism Corporation, I need to elevate the team’s status as much as possible. I think the media pays a little more attention to the team when we are UCI, as opposed to being domestic elite,” said Cranmer, who is in the process of finalising the 2023 roster.

“We could possibly race outside of the US, later in the year, in South America or in Europe. The goal would be to give the riders the experience because we have a lot of exciting younger riders.”

“Over the last year, TWENTY24’s long-term partnership with Virginia’s Blue Ridge has produced notable positive economic development in the region while supporting the team with the latitude to explore all cycling disciplines while maintaining a strong focus on Zwift eSports,” Cranmer said.

“Our growth over almost two decades has delivered more opportunities for talent ID, especially in high performance, notably the time trial but also in connecting young women to collegiate scholarships. The time is right for us to return to UCI designation with a mixed season of UCI races, track and gravel/MTB and Zwift racing. I’m excited about our roster of returning athletes and impressive new talent.”

The team decided not to renew its UCI Continental Team licence heading into the 2020 season, partly due to the cancellation of the Women’s WorldTour event Tour of California, which then coincided with the COVID-19 pandemic that saw races cancelled in the US and globally.

“I’m motivated again. Right before the pandemic hit, we decided not to race with a UCI licence, and it worked out for a couple of years because there was little racing, and we didn’t need to be. During that time, personally, it was a good time for me to reflect and see what I wanted to do within the sport. We began gravel races, adventuring and seeing what other things were out there. It was great, and I enjoyed it, but I did miss the high-performance aspect, and that is another reason that inspired coming back to a UCI status,” Cranmer said.

The Twenty24 programme, in all of their title sponsor versions, has seen riders develop and excel through their ranks in road racing and track cycling, such as Coryn Rivera, Ruth Winder, Mara Abbott, Chloe Dygert, and current World and Olympic Champion on the track Jennifer Valente.

“TWENTY24 is a cornerstone program of American cycling. The team does heroic work in identifying future international calibre riding talent, providing them with unique development opportunities, and supporting them as they contend for World titles and Olympic medals,” said Brandon Quirk, CEO & President of USA Cycling.

“Our belief at USA Cycling is that the US National Women’s Team will soon return to the #1 ranking in the world, and it’s due in no small part to the tireless effort of Nicola Cranmer and her team. We couldn’t be happier about the team’s return to the UCI ranks, and we look forward to many more years of productive partnership together.”

The team moved their operations base to Virginia in January and has brought in local investors who are now stakeholders in women’s cycling, supporting the team’s mission with high school programmes and collegiate scholarships, along with hosting races and cycling-related events throughout the region, such as the USA Cycling  Amateur Road National Championships, IRONMAN 70.3 Virginia’s Blue Ridge, the Anthem GO Outside Festival, and Virginia’s Blue Ridge Go Cross Cyclocross Race

“It really should be a case study for strategically targeted destination marketing,” said Kristin Armstrong. “It’s a group of organizations who have dialled in on their competitive advantage, and they’re doing it right.”