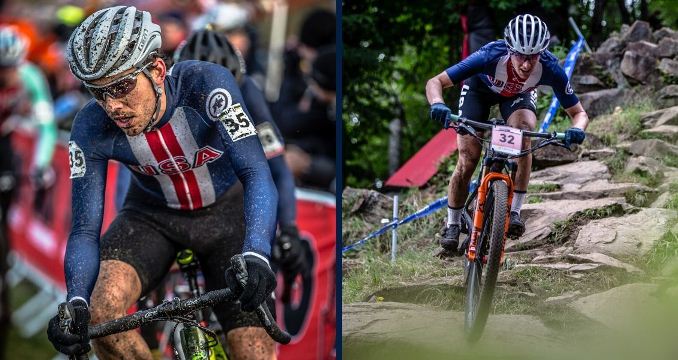 On Monday, May 11th, USA Cycling is offering a special virtual ride with 2x Mountain Bike Olympian, Lea Davison, and Pan American Cyclocross Champion, Curtis White! It will be an easy ride with some fun Q&A’s moderated by Tim Johnson and Lauren Hall from the USA Cycling Foundation.

Lea’s parents threw the kids into every sport imaginable growing up. Since her mom, Lucia, grew up in pre title IX world where the only opportunity was cheerleading (and you better believe she was the best at that), she wanted to give them every opportunity possible. So the competitive seeds were planted with sports from downhill ski racing and cross-country running to swim team (that didn’t last for long) and windsurfing. It was in high school that Lea was introduced to mountain biking, and it was love at first ride. She jumped immediately into racing at the local level and then, while competing in her first national races, realized two important things. She could be a professional mountain biker for a living and that mountain biking was an Olympic sport. From that moment, her sights were set squarely on making those two things happen. Fast forward twenty years and she’s done exactly that. She’s competed in two Olympics (11th place in London and 7th place in Rio) and also won two World Championships medals in 2014 and 2016. After experiencing how much sports gave to them, Lea and her sister wanted to empower as many girls as possible through cycling. The Little Bellas was born, a mentoring on mountain bikes program for girls. Lea’s true passion is empowering women and using her cycling career as a platform to do this.

Curtis has raced for the Cannondale p/b Cyclocrossworld team for the last 7 seasons, and currently lives in Duanesburg, NY. For a number of years, Curtis has balanced his cyclocross ambitions with racing professionally on the road for 4 years and pursuing a degree from Union College. He holds a B.A. in Classics with a minor in Law and Humanities. Curtis has attended numerous national team camps, and represented the USA at 7 World Championships. He is the 2018 Pan-Am Continental Champion, placed 2nd at the 2019 USA Cyclocross National Championships, and is currently ranked 15th in the UCI rankings.