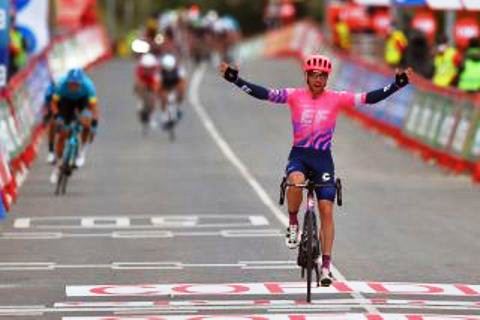 Michael Woods (EF Pro Cycling) won stage 7 of the Vuelta a España in Villanueva de Valdegovia, triumphing from the breakaway after jumping away to form a small lead group on the final ascent of the Puerto de Orduña and then beating his four companions with a late attack to the line.

The Canadian beat Omar Fraile (Astana) and Alejandro Valverde (Movistar) to the line, sealing his second win of 2020 and his second at the Vuelta after his victory at Balcón de Bizkaia in 2018.

“It was a special day – amazing to be racing in the Basque Country,” said Woods after the stage. “I got away with those four guys. They were riding super strong, and I felt bad that I couldn’t pull through.

“With Valverde in the group I just couldn’t pull through because we had Hugh Carthy in the peloton and I just couldn’t give him any more time in the general classification. So, I was able to sit in a little bit. Then I had a bit of luck, I had the legs, and I got the win.

“I pencilled in a bit – initially I was supposed to be with Hugh and not in the break – but the race just got so crazy the group got so big, I had to go across to make sure that we had numbers in it. It paid off great for me. I’m going to savour this one and after that I’ll start looking at the roadbook.”

Woods was part of a large attack group which merged together with an earlier break on the first ascent of the Puerto de Orduña 60 kilometres into the stage. The group never enjoyed a large advantage on the peloton but stayed away to the second ascent of the climb, with the base 29 kilometres out.

His attack on the climb led to the establishment of a lead group on the descent, with Fraile, Valverde, Guillaume Martin (Cofidis) and Nans Peters (AG2R La Mondiale) joining him, with the quintet holding off the break behind to contest the final kilometres among themselves.

The peloton crossed the line 56 seconds later after a quiet day for the general classification contenders. There were no attacks from the big names on the steep slopes of the Puerto de Orduña as the likes of Ineos Grenadiers and Jumbo-Visma were happy to keep a lid on the action.

Richard Carapaz (Ineos Grenadiers) retains the red jersey with an 18-second advantage over Hugh Carthy (EF Pro Cycling), while Martin takes over the lead of the mountain classification and will don the blue and white polka dot jersey as the race heads to La Rioja and the summit finish of the Alto de Moncalvillo on Wednesday.

Stage 7 of the Vuelta a España saw the peloton head back to the hills of the Basque Country, this time a 160-kilometre run from Vitoria-Gasteiz to Villanueva de Valdegovia which featured two ascents of the Puerto de Orduña, a steep climb which returns to the Vuelta for only the second time since 1978.

Rémi Cavagna (Deceuninck-QuickStep) was the first man to attack from the peloton but was unsuccessful after being caught by a chase group and then being swept up again. The opening 40 kilometres passed with no break establishing themselves, but a large group did manage to get away soon afterwards.

Sepp Kuss (Jumbo-Visma), Rui Costa (UAE Team Emirates), Magnus Cort (EF Pro Cycling), José Joaquin Rojas (Movistar), Michael Storer (Sunweb) and Alex Aranburu (Astana) were among the 16 men to get away, just before the first climb of the Puerto de Orduña, a climb once regarded as the toughest of the Basque Country.

The group hit the climb with a two-minute advantage on the peloton, but another group jumped from the peloton on the lower slopes of of the 7.8-kilometre climb which averaged 7.7 per cent with maximum of 14 per cent.

Woods, Fraile, Peters, Martin, George Bennett (Jumbo-Visma), Kenny Elissonde (Trek-Segafredo) and Tim Wellens (Lotto Soudal) were among the 18 men to go on the move, with a group including Valverde, Mikel Nieve (Mitchelton-Scott) and Davide Formolo (UAE Team Emirates) chasing, too.

The groups merged up front midway up the climb, making it 36 men in the break of the day. Kuss led the way over the top to take 10 points and retake the mountain classification. He was joined by Peters and Martin in the move, but they were caught soon after as Ineos controlled the peloton.

Valverde, AG2R’s Dorion Godon, and Lotto-Soudal rider Stan Dewulf jumped away from the break 60 kilometres from the line. The trio held a 30-second gap out front until Bennett, Wellens and Cort jumped across with 35 kilometres to run, dragging the remains of the break with them.

Meanwhile, the peloton lay two minutes in arrears, having never ceded more than three minutes to the break during the stage. Jumbo-Visma, Israel Start-Up Nation, Astana and Ineos were among the teams massing on the front on the run to the second and final ascent of the Puerto de Orduña, the top of which would come 19 kilometres from the finish line.

Godon stayed away from the break on the descent before the climb, carrying a 30-second lead onto the climb. The Frenchman was caught at the 25-kilometre mark, with two-thirds of the climb left, while back in the peloton the pace was upped by Ineos.

Woods jumped away three kilometres from the top after a period of attacks among the breakaway riders, with Peters setting off in pursuit a kilometre later and Valverde, Fraile and Martin joining him. Meanwhile, the Canadian crossed the summit a handful of seconds up on the four chasers and 1:55 ahead of the peloton. Martin led the chase group over to grab the mountain classification lead.

The quartet caught Woods on the descent with 15 kilometres to go, while the main break chased 30 seconds further back with the peloton 1:20 down. As the riders reached the final 10 kilometres, the attacks came up front, with Peters and Valverde both putting in digs. With five to go, they had just 20 seconds on the chasing group.

Fraile and Woods were off the front with three kilometres to run before Valverde led the group back across the gap, while the larger chase group still couldn’t make up any ground on the quintet.

It was Woods who would later make the day’s winning move, going solo from just outside the kilometre-to-go mark. Fraile led the chase, but the local man – hailing from 50 kilometres north near Bilbao – just didn’t have enough to make it across, and was forced to settle for second, missing out on completing his Grand Tour stage win set.