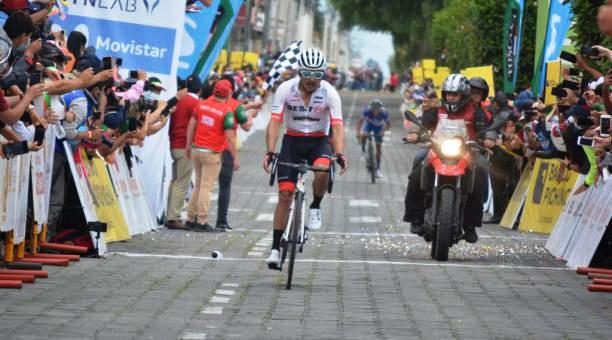 Byron Guamá, from Best PC Toscana, adds the third stage won in the Tour of Ecuador. Before he won the second and third and now he added the fifth. This Friday, November 27, 2020, Guamá won the fifth stage and had a spectacular performance from the beginning and Antonio Ante entered triumphantly where a party was lived.

The leader of the general classification is Santiago Montenegro and he will have to complete the last stage to confirm himself as the winner of the Vuelta in its 37th edition. At the exit of El Playón de San Francisco, a town on the border with Colombia and known as the cradle of the great champions, there was a party with balloons and colors at the start of the 87 cyclists who started on the fifth stage of the 37th edition of the Vuelta to Ecuador.

Jimmy Montenegro, from the Ecuadorian National Team, was the winner of the first mountain prize. In second place was Richard Huera (Selection of Ecuador) and the third was Byron Guamá.

In the second mountain prize, the order was repeated and key points were added.

The day was marked by an attack from Guamá from the beginning.

The Best PC Toscana driver came out with the urgency of closing the gap. Guamá won the first Intermediate finish  and maintained a demonic pace to try to save the location and close the gap. Richard Huera and Montenegro crossed first and second respectively in the Intermediate finish.

It was a close match, but Sebastián Novoa, from Best PC Toscana, is the champion of the flying goals of the Vuelta. In Antonio Ante there was a full party. The driveway was packed with people applauding the cyclists.

This Saturday, November 28, the sixth and last stage will be run in the Middle of the World. It will be 100 kilometers in a perimeter that will comprise 10 laps.