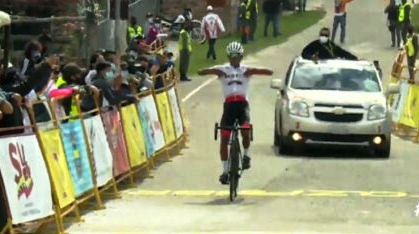 Anderson Paredes (Best PC Ecuador) took the victory this Friday in the sixth stage of the Vuelta al Táchira ending at the Casa del Padre.

The Venezuelan runner took advantage of the wide difference built by the day’s break, to launch himself for the victory that he finally reached at the finish line.

Roniel Campos (Atlético Venezuela) continues to lead two days from the end. Paredes, who was part of the group of escapees of the day, arrived at the finish line alone to celebrate a spectacular solo victory in this 128-kilometer journey that started from Santo Domingo. Simon Pellaud (Androni) sealed a great performance and was second, while Alessandro Monaco (Bardiani) entered third place.

As the kilometers passed and prior to the final climb to Casa del Padre, the top group began to lose units until it was reduced to its lowest level. Simon Pellaud was the first to take the initiative in the last twenty kilometers, the Swiss who was later connected by Anderson Paredes who with full determination left alone

. Two days from the end, Roniel Campos (Atlético Venezuela) remains the leader, Oscar Sevilla (Team Medellín) is second at 2 minutes 31 seconds and Danny Osorio (Orgullo Paisa) who discounted is third. Santiago Umba (Androni Giocattoli) who entered the eleventh box, is still the best young man in the test, in addition to being fourth in the general.

The seventh and penultimate stage of the Venezuelan race will take place this Saturday over a distance of 125 kilometers between San Antonio and Cerro El Cristo.

Day in which the last offensive actions of the men who dispute the positions of privilege are expected.