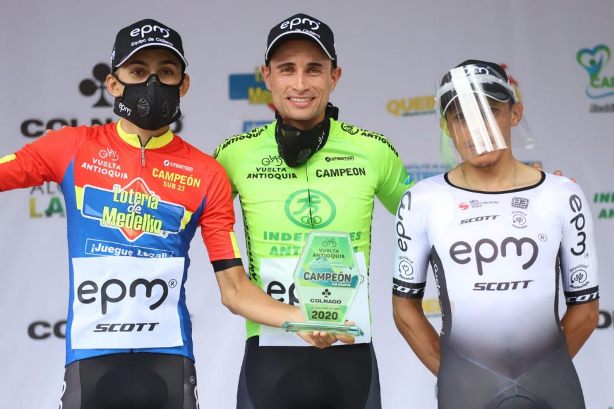 With a perfect score – three victories in three stages disputed – Alexander Gil (EPM Scott) was crowned champion of the 2020 edition of the Vuelta a Antioquia, with his triumph this Friday in the third and penultimate stage, an individual time trial of 21 kilometers that developed in Jéricó.

Gil, who made a full display in the time trial, had triumphed in the first two days, imposed an irrefutable record of 58 minutes 54 seconds, to take the victory in the individual time trial, beating the team by 18 seconds and 1 minute 28 seconds. riders from Orgullo Paisa, Sebastián Castaño and Danny Osorio who occupied the second and third position respectively.

The Antioqueño who also comes from being a great protagonist in the Vuelta al Tolima, -where he won a stage in Lebanon- is emerging as one of the great figures in the most important events of the national calendar, the Vuelta a Colombia and the Clásico RCN that are they will play in the month of November.

The final podium of the competition was made up of Gil as the great champion, Danny Osorio (Orgullo Paisa) was second at 2 minutes 35 seconds and Fredy Montaña (EPM Scott) 3 minutes 48 seconds.