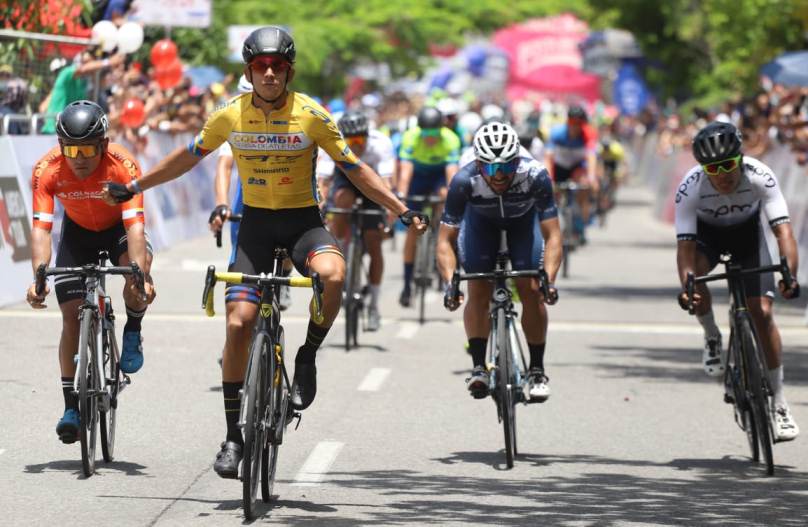 In a spectacular and tight sprint, the Barranquilla runner Nelson Soto won the first online stage of the Vuelta a Colombia Mindeporte 2021, which kept the Colombian-Spanish Óscar Sevilla (Team Medellín) as the leader of the race.

Ratifying his favoritism for this day, which was expected to end in a massive arrival, the young runner from Colombia Tierra de Atletas, once again demonstrated the great talent he has for packing and finished on the sentence line like the greats, lifting the arms and claiming the sixth victory in his personal account in the most important stage race on the national calendar.

Unlike the previous day, this Saturday began under a cold temperature, as a heavy rain accompanied the departure of the 173 runners in the city of Yopal, where they would start their way to Pore and Paz de Ariporo, where they would return again to the capital of the department of Casanare to complete 188.1 kilometers of route.

The runners started at a moderate pace due to the danger posed by the wet asphalt; However, as the caravan progressed, the temperature increased, the sun began to appear and with it the first skirmishes of the restless who wanted to start moving the race.

The Mexican Ignacio Prado (Canels-Zerouno), the Cundinamarqués Steven Cuesta (Sundark) and the llanero Sebastián Lesmes (Team Recapi-Llaneros) were the adventurers who launched the attack and took the lead to command the race.

This triplet was quite combative and was taking an important advantage over the main group, reaching a maximum difference of more than 4 minutes that allowed them to dispute the intermediate sprints arranged for this second day of the 71st edition of the Vuelta.

The three special sprints were won by Steven Cuesta, who set out to join the escape with the intention of joining the three to keep the jersey of this classification. Prado was second in the three sprints, while Lesmes only scored in the first two, finishing third in both, since in the last one he had already remained in the top group.

The group, which worked behind in search of the discount, led by UAE Team Colombia, Colnago, Colombia Tierra de Atletas and Soñando Colombia, was closing the gap with the leading pair, whom it connected with 15 kilometers to go.

After the connection, the peloton moved again and nine riders left the group without success, among them Sebastián Castaño (Orgullo Paisa), Robigzon Oyola (Team Medellín) and Julián Osorio (Bicistrogman), who later tried it alone, but neither I can do it.

In the end, the group reached the last kilometers compactly, where the specialists in these stage finishes were positioned at the front of the peloton to launch the attack. The well-known sprinters and favorites to fight for the stage win came to star at the end of the day.

Bryan Gómez (Supergiros), Diego Ochoa (EPM-Scott), Jordán Parra (Dreaming Colombia), Luis Carlos Chía (Colnago) and Nelson Soto (Colombia Tierra de Atletas) were some of the runners who went on to fight for the victory, being the latter being the fastest at the finish line and the one who at the end raised his arms to celebrate his victory, ahead of Chía and Parra, who finished second and third, respectively.

First victory for the team led by Luis Alfonso Cely, who has just won the Youth Tour with Jesús David Peña and who wants to continue to win titles in this Tour of Colombia UCI 2.2.

The leader Óscar Sevilla finished in the eighteenth box of the stage, with the same time as the winner Soto, which allowed him to keep the leader’s Orange shirt in his possession. The second online stage of this race will be held this Sunday, April 18 between the departments of Boyacá and Cundinamarca, which will begin in the municipality of Paipa, will pass through Tunja, Ventaquemada, Villapinzón, Chocontá, Gachancipá and will end in Tocancipá, to complete a total of 140.2 kilometers of route