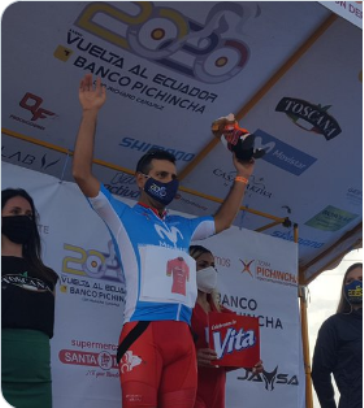 The Ecuadorian Joel Burbano, from Sin Fronteras J.N. Team, this Thursday was made with the fourth stage of the Cycling Tour of Ecuador that was played between the towns of San Roque and La Estrellita and that, in the absence of official confirmation, seems to transfer the leadership of the general.

Burbano did the 117-kilometer ride in 3 hours 18 minutes and 4 seconds, the same as Henry Velasco (Eagle Bikes). In third position, one second, Sergio Chumil (Guatemala) entered.

Today’s was considered the queen test of the Vuelta, with a 19-kilometer climb in the final section where Burbano imposed his pace and strength.

The stage was characterized by a break from the start of seven riders, with resolution on the same finish line in favor of the Carchense.

After Thursday’s stage, the overall lead changes hands for the first time since the lap started on Monday from Cristian Toro to Velasco.

In the mountains, Burbano with 34 points leads the classification followed by Jimmy Montenegro (Ecuador National Team), with 26, and Velasco (Eagle Bikes), with 22, according to provisional data.