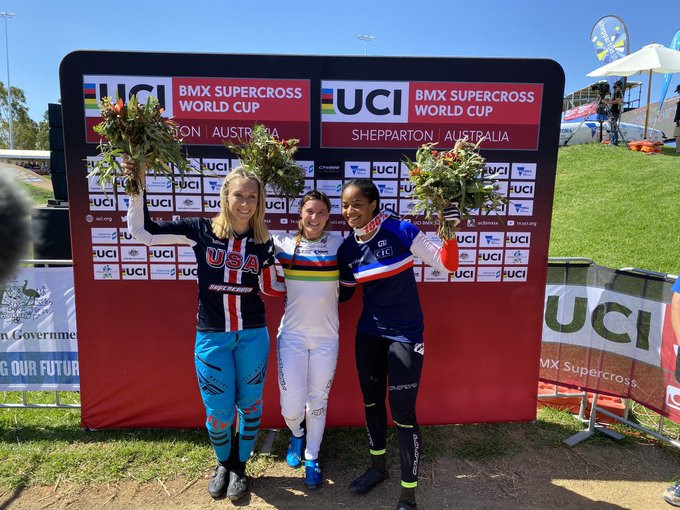 In the first BMX Racing World Cups of the year, riders headed to the land down under for Rounds 1 and 2 in Shepparton, Australia.

Round 1 on Saturday was a bit of a hectic day. In the Elite Women’s race, World Champion, Alise Willoughby (Chula Vista, Calif.), was running quick laps all day staying out in front. During the main event, she won in style coming to a close finish with Australia’s Saya Sakakibara. In the semi-final, Brooke Crain (Visalia, Calif.) crashed in turn one, with US National Champion, Felicia Stancil (Indianapolis, Ind.), having no other place to go, but going down with her. In the Elite Men’s race, 2016 Olympic Gold Medalist, Connor Fields (Henderson, Nev.) finished with a hard fought fourth place. Corben Sharrah (Tucson, Ariz.) didn’t have the best start in the quarter finals ending his day a little early.

Round 2 on Sunday proved to be a little better for all the USA athletes. In the women’s main event, Willoughby did what she does best and took the lead right out of the gate. Stancil followed right behind, staying on her wheel for the whole lap. Both USA riders finished first and second, respectively, with a gap on the rest of the group. In the men’s main event, Fields came out of gate one flying, making his way into the first turn in second place. He made the pass in turn two and kept extending his lead the whole way to the finish.

With the Olympics only a few months away, these results are crucial for athletes trying to qualify for Tokyo. Willoughby couldn’t have had a more perfect weekend. “Getting my first double-win weekend on the opening rounds of the World Cup series in an Olympic year is extremely special,” said Willoughby. “I have had a lot of success over the past few years, but also a lot of ‘almosts’ so I had a lot of fire in my belly this pre-season to prepare for the big year. I knew it was a big opportunity getting to race down under with my second family and wanted to make the most of it and am so pleased that I ticked all the boxes leading up to this event and then executed without dropping a lap all weekend. It’s a pretty rewarding feeling when the puzzle comes together like that.”

Fields was grateful for his performances as well. “It feels incredible to start off 2020 with a World Cup Win,” said Fields. “It’s great to get the year rolling on a positive note and see that all of the training has paid off. Looking forward to more as we build towards a home World Championships in Houston and if all goes well the Olympics in Tokyo! Thanks as always to USA cycling and its staff, my coach Sean Dwight, and my personal sponsors. It feels awesome going into the events with the best support possible.”

We’re so proud of the athletes and our support staff for having such a successful weekend. The riders aren’t out of Aussie territory yet. World Cup Rounds 3 and 4 are this weekend in Bathurst, Australia.