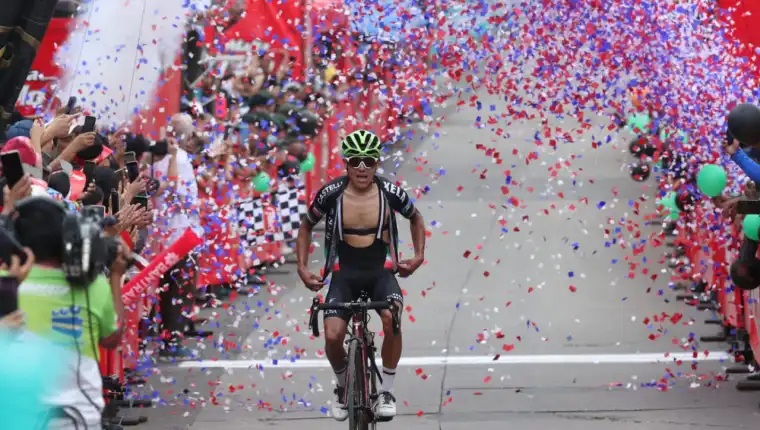 This Tuesday the third stage of the 61st Cycling Tour of Guatemala was held, which traveled from the department of Jutiapa to Guatemala and left the Colombian cyclist Wilmar Pérez from Cerámicas Castelli as the winner.

On this third day of competition, the more than 120 cyclists had to cover a total of 108 kilometers, being the shortest route of the 10 stages of the Cycling Tour of Guatemala 2022.

This third stage closed with 3 hours, 12 minutes and 20 seconds, time with which Pérez stopped the clock at the Fraijanes finish line to become the new leader of the general classification. In second came Mardoqueo Vásquez, who won the best Guatemalan sweater. Vásquez is also the current

Third place went to Sergio Chumil, who achieved another podium and remains the best in the U-23 category.

During this stage, 8 intermediate prizes were disputed divided into 3 flying goals and 5 mountain prizes. The main protagonists were the cyclists José Santoyo from Mexico, Dorian Monterroso from Guatemala and Christian Jurado from Panama, who were the escapees during a large section of the route.

Monterroso, who had had a rough second stage, in which he suffered a heavy fall, managed to recover and was one of the leading cyclists in the intermediate prizes.

The trio of the breakaway lasted until they reached the third flying finish line at kilometer 86 in Aldea Antwerp, from that moment on, and in full escalation the advantage over the peloton was less and less.

At that time Mardoqueo Vásquez, current champion of the Vuelta a Guatemala, little by little began to fight for first place, however, in the final sprint Colombian Wilmar Pérez ended up taking first place.

This Wednesday the fourth stage of the Guatemalan round will be held, starting in Santa Lucía Cotzumalguapa and ending in Sololá, over a 116.5-kilometer route, which includes six mountain prizes. The successor of the local rider Mardoqueo Vásquez, champion of the last edition in 2020, will be known on Sunday on the slopes of the Volcán de Fuego in Escuintla (Guatemala).