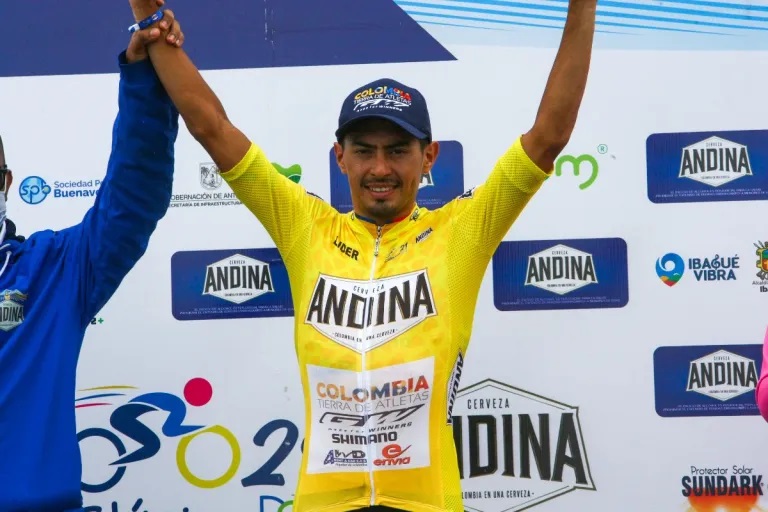 In a great demonstration, Yeison Reyes (EPM-Scott) dominated the fifth stage of the Clásico RCN Andina by winning from the break-away, while Wilson Peña (Colombia Tierra de Atletas) maintained the lead of the race.

Aldemar Reyes’ brother achieved EPM-Scott’s second victory this edition of the Duel of the Titans, with brilliant action with three kilometers left on the ascent to Murillo.

Under an inclement sun, with 30 degrees, the day began with multiple attacks in the first bars of the race, however, none of them prospered due to the high pace imposed by the peloton led by Colombia Tierra de Atletas GW Shimano.

The thick fog that was present on the ascent to Murillo saw how little by little the escape of nine riders disintegrated, 15 kilometers from the finish line they resisted at the head of the race Dubán Bobadilla (Team Herrera Sport), Adrián Bustamante (EPM-Scott ) and Diego Soraca (EBSA).

In the middle of the long ascent, the Bogota-born Bobadilla, the revelation of the Duel of the Titans, made a great ascent that allowed him to break the race, later Cristian David Rico (Strongman Watches G Force) and Cristian Cubides (Team Herrera Sport) tried, but on the finish Yeison Reyes (EPM-Scott) was the strongest to take the victory.

The rider from Cundinamarqués Wilson Peña remained indestructable in the mountainous days, remaining as the leader of the general classification of the Clásico RCN Andina after overcoming another tough obstacle, the out-of-category port in Murillo.

“We have run a fairly tough stage, very demanding, a very long climb here in Murillo, but the team has done an excellent job, they have controlled the race in the best way as we had planned with the directors, and the result is good. teamwork. We have gained a little more time and we continue in the fight, ”said Peña.

The runner from Zipaquirá, who was not on the list of favorites, continues to surprise with his level and looks strong to stay in the lead. «I believe the story, but more than that I enjoy the day to day, the kilometer by kilometer, I love riding a bicycle and I enjoy being the leader, of running this RCN Classic, so we enjoy day by day. Tomorrow we will see how the race unfolds defending the leadership ”, added the cyclist from Cundinamarca.

The leader of the Tierra de Atletas continues to show great regularity, which he maintained in the last races of the season, such as the Vuelta a Nariño and the Vuelta a Boyacá, where he won stages.

“I am very happy to continue with the yellow leader jersey. There is a lot of Classic ahead, anything can happen, cycling is like that, it is unpredictable, but we are in very good condition. The team supports me in the best way, we will continue working together and with the aim of keeping the yellow jersey until the end ”, he added.

Peña knows that there is still a lot of mountain left, but he hopes to continue with his level and continue being the protagonist of the ‘Duel of the Titans’. “I know the stage of Alto La Línea and Salento, a very entertaining stage, tough, like all of this Classic, so we will aim to take advantage of each of the remaining stages,” concluded Peña.

This Thursday the sixth stage of the Clásico RCN Andina will be held, starting in Mariquita and ending in Ibagué, over a 114.5 kilometer route over mountainous terrain. The successor of Antioqueño José Tito Hernández, champion in 2020, will be known on Sunday in Buenaventura.