YURGEN RAMÍREZ CROWN THE MOUNTAIN AND ASSAULT THE LEADERSHIP 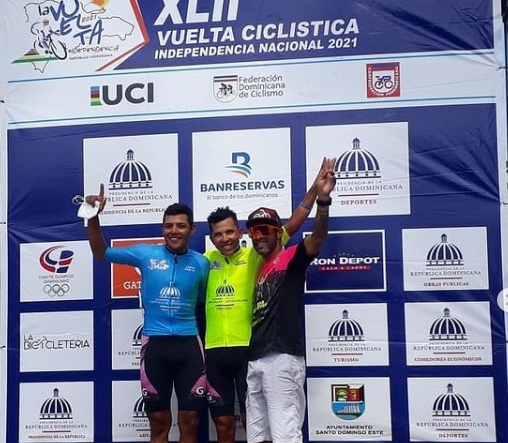 The rider Yurgen Ramírez (Venezuela País Futuro) consolidated today a spectacular task in the fourth stage of the 42nd edition of the Vuelta Independencia that was run this morning at a distance of 120 kilometers between Santo Domingo and Rancho Arriba.

The natural runner of Abejales in the traditional cycling region of Táchira in the South American country took advantage of his skills as a climber to achieve the victory alone with a time of 2:55:04, beating Rafael Hernandez (Arco Iris), Diego Milan by 02:27 (Inteja) at 03:03 completed the podium.

In this way Ramírez went on to command the individual general classification of the lap with 13 hours, 58 minutes and 19 seconds with an advantage of 5 minutes and 37 seconds over his teammate Franklin Chacón and 6:36 over Geovanny García representing the EDA.

The Venezuela País de Futuro team dominates the general of that section with 22 minutes and 24 seconds over its closest pursuer the EDAC, other leaders that are dominated by the Morochos are the U23 by Omar Ruiz and Yurgen Ramírez himself who with the result of Today he also strengthened the place of honor in Points with 55 in tough determination with Bermudian Kaden Hopkins who accumulates 53.

The rest of the jerseys are worn by Adrián Nuñez (Inteja) in flying goals with 14 units and the chapin Alexis Julajuj of the ECC in the mountain with 24 points in hard determination with Ramírez who has 23.

Tomorrow the fifth stage will take place on a route over the ring road at a distance of 180 kilometers.