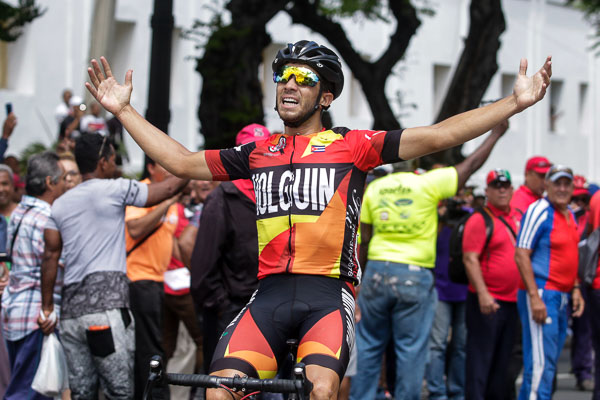 SANTIAGO DE CUBA. Holguin Alejandro Parra, with brave and spectacular sprint, sentenced the peloton in the same goal to dominate today the second stage of the VI National Classic of Ruta Baracoa-La Habana and become the new leader.

In the section from Guantanamo, an official route of 104.1 kilometers, Parra and the Santiago Miguel Valido, who runs for Sancti Spíritus, marked 2 hours, 18 minutes and 20 seconds. After crossing the line Leandro Marcos (Havana), Frank Consuegra (Holguín), Yans Carlos Arias (Las Tunas) and Luis Ramírez (Granma), at the head of the peloton to which they granted the same time of 2: 18.24 hours.

The young man of 21 years was yesterday in ninth place, but with this performance he snatched the leader’s shirt to Yans Carlos, now third because in the second place he remained Marcos. Both have similar total time of 6: 09.59 hours, while the Holguin adds 6: 09.55.

On this second day, sunny at the beginning and then cooler, four riders broke free from the multicolored snake some 15 kilometers from the race in Guantánamo and the three flying goals were shared until reaching Santiago de Cuba, where the stage ended with five laps to a circuit. Only in the last turn could they be reached.

They were Felix Nodarse (Artemisa), Carlos Álvarez and Yoandy Freire (Sancti Spíritus), and Mario Couso (Santiago de Cuba), who came to take advantage of up to two minutes over the peloton. In fact, they became the heroes of the day with the victor Parra.

In La Maya (km 47.1) they crossed by order Nodarse, Álvarez and Couso; in Songo (km 54) Felix himself, the veteran Mario and Carlos, and in front of the School City July 26 (km 76.6) did Álvarez, Nodarse and Couso.

Now Nodarse scores in the Points Ranking with 8 points, followed by the young Granma Ramírez (7) and Álvarez y Valido (6).

This Saturday will take place the third stage between Santiago de Cuba and Holguin, at a distance of 142.4 kilometers, with a mountain prize at the start in Puerto Moya (km 21.4) and another in Rejondones (km 114.5), both of category C .

The flyers will be in Palma Soriano (km 41.6), Mella (km 73) and Entronque de Birán (km 85.8). The goal will be located in front of the Calixto García baseball stadium in the City of Parks, where the caravan should arrive at about 12 noon. (Lissette Ricardo / jit.cu)