ARGENTINA WILL PEDALEAR THE CYCLING WORLD 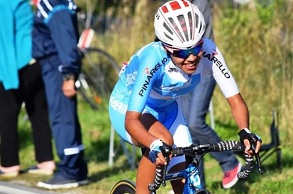 BUENOS AIRES. They will compete against the fastest and toughest on top of a bicycle, Eduardo Sepúlveda, Fernanda Yapura, Nehuén Bazán, Luciano Martínez and Marcos Méndez will be the Argentine representatives in the world road cycling championship that will be held from this Sunday, September 22 to 29, next in England, where twelve global titles will be defined in the Professional, Junior and Under-23 Elite categories, in both men and women.

As reported by the Argentine Federation of Track and Road Cycling (FACPyR), the Olympic Eduardo Sepúlveda will run the 285 kilometers of the professional elite test in platoon, which will be held on Sunday September 29 through seven laps in The city of Yorkshire, northern England.

For its part, Fernanda Yapura will be the only Argentine woman to participate in this 86th edition of the road cycling world championship, organized by the International Cycling Union (UCI).

The Salta cyclist will roll the 150 kilometers of the platoon race and also the 33 of the women’s elite’s individual time trial, added to the chrono by mixed teams, a new modality in which she will intervene as a member of the UCI set.

With seven national titles, Fernanda Yapura won 34th place in the individual time trial of the 2018 road cycling world championship in Austria, where she also finished 62th among the 157 competitors of the women’s race in platoon.

In the U-23 belt, Argentine cycling will have young Nehuén Bazán and Luciano Martínez as ambassadors, while his pair Marcos Méndez will attend as an eventual replacement in case of an eventual injury. (eldepornauta.com.ar)