ARLENIS SIERRA FOR RECOVERING THE CROWN 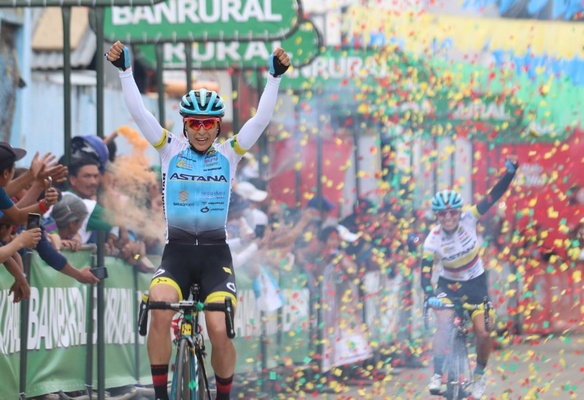 HAVANA. They may not be able to repeat the historic triplet of Guadalajara 2011 when with Arlenis Sierra at the top they took the podium, but it is certain that their companions will return to support this camomile to recover their crown in Lima and the island remains in the medallero of road cycling since they were inserted in the games in Cuba in 1991.

The leader of the Astana club with 26 years of age, a lot of road and successes, is the one that leads the group of seven women that includes the veteran world multi-medalist and of these continental appointments, Yumari González, who was silver in the appointment of Mexico, while the tanned Yudelmis Dominguez will be absent because she enjoys something as special as becoming a mother.

Next to Arlenis, fourth in Toronto 2015, and Yumari are registered the routes Iraida García, Heidy Praderas and Idaris Cervantes, and complete the lot the mountain bike contestant Ludisneli Fleitas, and the several times podium of the orb, Lisandra Guerra, aspiring to tanned speed and keirin.

They are happier this time, because they will be accompanied by the men that Cuba managed to qualify, which could not be with any for the games in Canada, one of them, Pedro Portuondo, with at least bronze prognosis en route, and head of the team of Alejandro Parra, Hidalgo Vera and Frank Sosa, and the Yans Carlos Arias and Leandro Marcos.

Of the four bronzes that are predicted, Arlenis will also try it in omnium, the test at the velodrome of several events, taking advantage of its resistance and skills that authenticates a full chest with, among many others, a jewel of that color in the race for points of the 2016 World Cup, when she was a student of the UCI World Center in Switzerland thanks to her performances since she debuted in the 2010 youth orb championship with a similar track record.

In 2016 he also won the turn to Costa Rica, won his first victory in Europe by dominating the Tour of Brittany, France, as well as the prize for the most combative and best U23; silver in the Pan American Route; third in the strong Tour to San Luis, Argentina and closed with the prominent place 28 in the Olympic Games of Rio 2016 to overcome the historic place of Cuba, 43 of Dania Pérez in Sydney 2000.

The Sierra Antillana accumulates more than a dozen medals of different colors in the Pan American Sports Championships, including gold on the road and track, in the latter mainly in the scoring and Scratch group races.

In the Central American and Caribbean Games of Veracruz 2014 he integrated the golden quartet of the persecution that implanted marks for the event; it was bronze in Scratch and fourth in the route, day in which Marlies Mejías, Yumari and Yudelmis secured the one-two-three.

But in Barranquilla 2018 it was where Arlenis stood out the most by adding titles in the solo time trial; in Madison a duet with Yudelmis and in team chase (with Marlies, Maylin Sánchez and Yudelmis); silver in the individual and bronze in the points race.

Arlenis, born on December 7, 1992, started cycling nine years later when her own parents took her to a sports area in Manzanillo. Coach Antonio Castillo promoted her in 2003 to the EIDE of Granma, province to which he gave his first victories in the National School Games and in the 2006 national youth.

More than a decade accumulating successes under the guidance of coach Leonel “Chino” Álvarez, the Kasajo Astana club based in Italy inserts it and in a short time became its leader, becoming one of the best routes on the planet, even in the Top Have a route of the 2019 World Tour, scoring for the next Olympic Games.

Sum outstanding performances in Europe, the United States and Latin America, which began with silver in one of the phases of that World Cup in 2017 in Cittiglio, Italian province of Varese and bronze in the Tour of California, where he again excelled in the three stages with two podiums and bronze in the final classification by points. Also that year was imposed on the turn to Costa Rica.

In 2018, he entered the first in several races of the Tour and rubbed shoulders again with the highest level routes in Italy, Spain, Holland and Belgium to ratify his leadership in Astana. For all her performances in the last two years she has been chosen among the Ten Best Athletes of Cuba in 2017 and 2018.

This season was another choice of points for qualifying for Japan 2020 and was victorious in the Cadel Evans Great Ocean Road Race in Australia, one of the important ones in the universal circuit; Ninth entered the Driegaadse Brugge-De Panne and fourteenth in the Gent-Wevelgem, both in Belgium.

In the tour to Guatemala, La Sierra won four of the five stages and paradoxically became sixth overall, but as she clarified the essential thing was to work for her Astana team, which stood out by winning the return of her Colombian partner Liliana Moreno.

He exhibited again his good ride on the roads, the same in mountains as in the springs, in which he has become a headache for his rivals for his strength, endurance and courage, warrior as Arlenis himself qualifies to Cuban cyclists and she is precisely one of his best examples.

On October 23, 2011, after his feat in Guadalajara with 17 years, Arlenis recognized the teamwork of Yumari and Yudelmis, to whom he dedicated his triumph because if his help had not been able to detach from the tip in search of the goal alone.

He said he wanted to be equal to or better than Yumari and Yoanka González, the only Olympic medalist of this sport in Cuba for his silver in the points race in Beijing 2008.

When this Friday the cyclists fly to the Peruvian capital to begin their commitments on August 1, Arlenis will be in a new battle, “Always for More”, because as she says she will fight to return to the top of the Pan-American podium, and then continue for his ticket to the Olympic event and Lima will be a crucial “flying goal” on his route to Japan to realize his dream. (Lisset Isabel Ricardo / jit.cu)