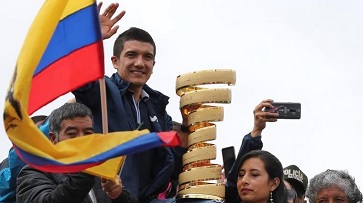 QUITO. Officials of Ecuadorian cycling welcomed on Tuesday the proposal to declare June 2 as national cycling day, coinciding with the victory of Richard Carapaz in the recent Giro d’Italia.

The president of the Ecuadorian Olympic Committee (COE), Augusto Morán and the holder of the Ecuadorian Cycling Federation (FEC), Oswaldo Hidalgo, considered “transcendental” the proposal made by the legislator Sebastián Palacios to remember the feat of ‘the Locomotive’, as they also say to Carapaz.

“I think it is an important and momentous event for the sport that the National Assembly (Parliament) seeks to set as a special day of Ecuadorian cycling on June 2,” said Morán to Efe.

The president of the COE also stressed that, if the proposal is approved, it will be “very important”, not only for cycling, but for Ecuadorian sports in general.

In addition to the proposal of national day, the legislator will request this Tuesday the head of State, Lenin Moreno, to organize a working table with the participation of athletes, representatives of the Executive, the Legislative and the private company to propose mechanism and incentives for the athletes.

In the request to the president it is also confirmed the elimination of tariffs for the importation of sports equipment, and that the promotion and massification of sport becomes a State policy in a more direct and profound way for all levels.

On the day that Carapaz won the Giro d’Italia, Moreno announced the elimination of the import tax on competition bicycles, a tariff that is currently at 30 percent.

The head of state said, in addition, that economic support will be provided to the Ecuadorian cyclist and all athletes in the country.

On June 2, Carapaz became the first Ecuadorian to win the Giro d’Italia and climbed to the top of a podium where he was accompanied by the Italian Vincenzo Nibali, second, and the Slovenian Primoz Rodlic, third. (hoylosangeles.com)