CARLOS RAMÍREZ AND MARIANA PAJON, PROTAGONISTS AT THE WORLD CUP OF BMX FRANCE 2019 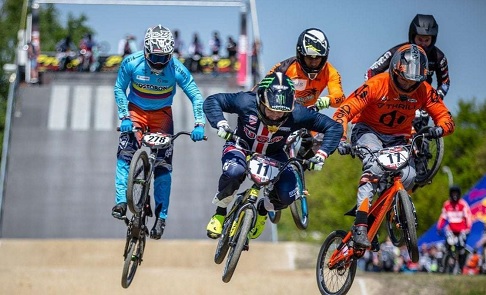 BOGOTÁ. The weekend in the track of Saint Quentin in Yviilines had among its protagonists the Colombian team Manto Postobon, who counted for the first time in his roster the Franco-Colombian Vincent Pelluard, who along with Mariana Pajón, Carlos Ramírez, Diego Arboleda, Carlos Mario Oquendo, Gabriela Bolle and María Camila Restrepo, managed to make a good presentation thinking about qualifying for the Tokyo 2020 Olympic Games.

Pajón, who continues to show evident progress in his return to the international elite, advanced to the semifinals in both days, added points and continues to fully comply with his preparatory process for the Pan American Games Lima 2019, and qualifier to achieve the quota his third consecutive Olympiad.

Bolle and Escobar were on the sidelines in the round of 16, while Restrepo did not pass the first qualifying rounds.

In the male branch, Ramírez also qualified until the penultimate instance and when it seemed that he managed to get between the four finalists, a touch with the Brazilian Anderson de Souza took him off the track in the last ban preventing him from continuing with the illusion of the grand final.

Pelluard and Arboleda stopped their participation in the quarterfinals, Oquendo only advanced to sixteenth.

The next challenge of the delegation led by German Medina will be the World Championship in Zolder, Belgium. (Fedeciclismo Colombia)