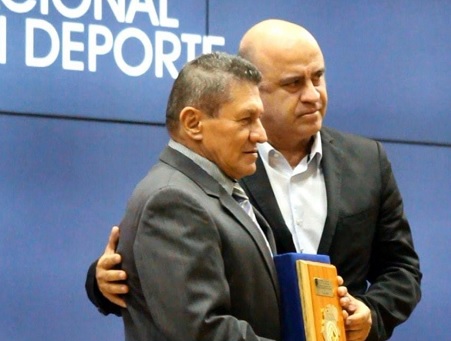 BOGOTÁ. The Carrera Colombia Oro y Paz 2.1, which ran from February 6 to 11 last year, was selected as the best event of 2018, in the award ceremony of the Colombian Association of Sports Journalists Acord, section Valle del Cauca, in solemn ceremony held on the night of Tuesday, May 21 at the José Fernando Arroyo Valencia Auditorium, of the National School of Sports University Institution.

The award was received by Mr. Hernando Zuluaga Aristizábal, vice president of the Colombian Cycling Federation and general director of the competition.

The Oro y Paz race traveled through the departments of Valle del Cauca, Cauca, Quindío and Risaralda, with an important participation of national and international riders, as well as other international cycling greats who came to know the beautiful experience of the first edition .

Along with the Gold and Peace Race, the Cali SportFest 2018 and the sub-site of the XXIII Central American and Caribbean Games were postulated as the best event.

The voting of the partners Acord Valle recognized the great impact of the event, which was organized by the Colombian Cycling Federation, with the support of Coldeportes, Indervalle and the mayorships of the host municipalities.

The gala was attended by personalities such as José Luis Echeverry, vice president of the Colombian Olympic Committee; José Fernando Arroyo, rector of the I. E. National School of Sports; Rubén Darío Muñoz, undersecretary of Sports of Cali, leaders of the departmental and municipal institutes, as well as the mayors of Palmira (Jairo Ortega Samboní) and Buga (Julián Latorre). (Marco Antonio Garcés / Press F.C.C)