CUBA MUST HAVE ITS INTERNATIONAL TOURNAMENT, AFFIRMA DIRECTIVE OF THE WORLD CYCLING 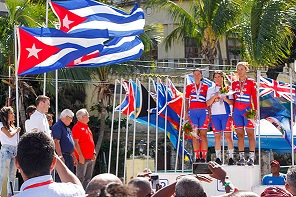 HAVANA. Cuba must have an event on the world circuit, said Frenchman David Lappartient, president of the International Cycling Union (UCI), visiting this capital on the occasion of the Congress of the Caribbean Confederation and the area tournament in the road mode .

Cuba is the largest island in the Caribbean, it has to host an international competition, we must create the conditions for it to take place, the UCI wants to support it, Lappartient emphasized.

The manager also addressed issues such as the fight against doping and the characteristics of the road test of the Olympic Games in Tokyo, Japan, in 2020.

It will be a very beautiful scenario, although it is expected to be extremely demanding, with high temperatures, however, cycling is like this, a sport of great effort, Lappartient said.

President since 2017 of the governing body of cycling, the French valued that the Caribbean Championship was a success.

Held this weekend in the Havana seawall, the tournament was dominated by the Cuban rider, among competitors from 24 countries.

With four medals, Heidy Praderas, 21-year-old from Cabaña, stood out, who won the under 23 category title and the silver medal in the elite section of the time trial race, as well as the scepter in the two categories in the road map. (ACN)