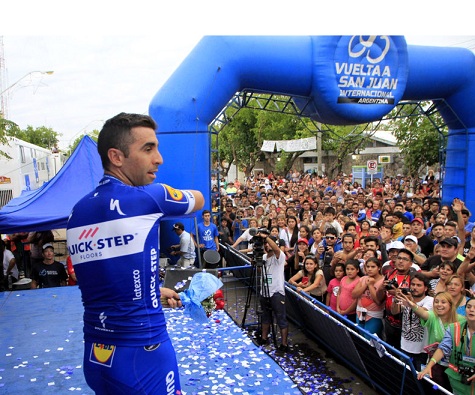 SAN JUAN. ARGENTINA. This weekend kicks off the Vuelta a San Juan, one of the most important stage races in the American continent. The Argentine event will gather many stars and some of the main teams of the international squad.

In the 37th edition of the Vuelta a San Juan Internacional there will also be another Spanish team, the Caja Rural-Seguros RGA, as well as first level training such as Team Medellín, Israel Cycling Academy, Nippo-Vini Fantini-Faizanè, Androni Giocattoli-Sidermec Bottecchia and diverse national Latin American selections.

Vuelta a San JuanThis competition, organized by the Pedal Club Olimpia together with the Government of San Juan, has already become a traditional appointment for many of the stars of cycling to begin their season and set-up in the face of the great tests of the calendar. Stages against the clock, days of high mountain (there will be an end in the Alto del Colorado, to more than 2,500 meters of altitude) and good weather will ensure the show one more year this 2019.

In addition, in parallel to the Vuelta a San Juan, other cycling events will also be held, such as a Gran Fondo in which former cyclists like Juan Antonio Flecha or Filipo Pozzato will take part; the Inclusive Tour of paracycling, which is in its second edition and will be held at the San Juan del Villicum Circuit, coinciding with the sixth stage; or the Criterium ‘South American Union of Cycling’ through the streets of downtown San Juan and in which, one day before the start of the round, its participants will meet in this exhibition.

In the last edition, the final winner of the Vuelta a San Juan was the manchego Óscar Sevilla (Team Medellín) after the UCI disqualified and sanctioned by doping the Argentine Gonzalo Najar, who tested positive for CERA. (topbici.es)