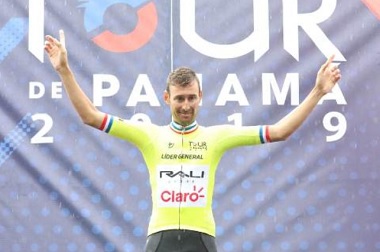 CHICÁ, PANAMA. Fabricio Ferrari won the fifth stage of the Tour de Panama, considered the Reyna stage, for the terrain with many ascents. In the second place, arrived, Joseph Caballero, of the Aircraft; and thirdly, Franklin Archibold, who defends the colors of Team Ininco.

The heavy rain accompanied the cyclists until they reached the finish site, in Chicá, where the Rali-Store representative timed two hours, 52 minutes and 43 seconds; followed by Caballero and Archibold, both with the same time of two hours 53 minutes with 15 seconds.

The first flying goal, located in Antón, was won by Kevin Vásquez, of Rali Store; secondly, Leonardo Campos, from the Total Chilsaca Eurobus, arrived; followed by Rodolfo Ayarza, from Wong Chang Warehouse; and in the fourth position, Joseph Caballero, representative of Aeronaval.

The second, located in San Carlos, first, came the local Rodolfo Ayarza, from Wong Chang Warehouse; followed by Leonardo Campos, of the Total Chilsaca Eurobus and Joseph Caballero, of Aeronaval and in the fourth box, Rafael Carrillo, of the same team.

In the Sub 23 category, Franklin Archibold, from Team Ininco, continues to command; best youth, Hernán Aguilar, from Caminos de Omar de Pacora; and there is a new general leader, Fabricio Ferrari; from Rali-Store.

According to Paola Carretero, of the Panamanian Cycling Federation, the first five stages have already been completed and two years after the end of this version of the Tour, the event has developed normally; It has seen a good level of competition and in the places visited, fans have shown a lot of interest in this sport. “Without a doubt, this has been one of the most exciting Panama Tour in history, for its journey through almost all the provinces,” he added.

Sixth stage that will take place tomorrow, Saturday, October 12, will move to the Atlantic coast, with a route that will consist of 103 kilometers. The departure will be from the Chilibre Police, until reaching the 4 High in Colón, to finish after the recently opened Atlantic Bridge, journey to the Costa Arriba, in Colón. (metrolibre.com)