FERNANDO GRIJALBA WON THE FOURTH STAGE OF THE PANAMA TOUR 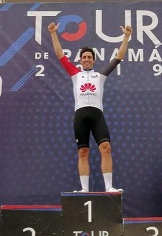 PENONOMÉ, PANAMA. The Spanish cyclist Fernando Grijalba, who defends the colors of Rali Store, won yesterday the fourth stage of the fifteenth edition of the Tour de Panama.

On a journey of 126 kilometers, from Guararé (Los Santos) to Penonomé (Coclé), Grijalba carried out a time of two hours, 58 minutes and 55 seconds to lead the fourth phase of the open at will.

On the other hand, Adrián Orcel, representative of the selection of Guadalupe, finished in the second position. Meanwhile, the third location went to the Panamanian competitor Bolívar Espinosa, with the same time as Orcel.

The Colombian cyclist Albeiro Suaza, from Rali Claro, continues, one more day, as the general leader of the 2019 Panama Tour, with an accumulated time of 11 hours and 52 seconds.

Despite the adversities, Suaza has managed to follow in the wake of the leaders and remains at the top of the open with much poise.

According to FEPACI, the Spaniard Fernando Grijalba ‘thanked and dedicated the stage to his teammates ‘, since ieron allowed him to obtain the victory in the fourth stage’.

Today the fifth stage will be developed, which will include a distance of 101 kilometers from Penonomé to Chicá. (elsiglo.com.pa)