GOLD AND BRASS FOR THE SPECIALIZED-TUGÓ-SRAM IN CHILE 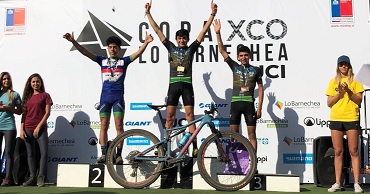 An event of international renown with UCI C1 classification, in a new circuit of Olympic mountain biking located on the outskirts of the city of Santiago, with the participation of more than 300 runners of various nationalities and regions of Chile.

Gold Medal for Camilo Andrés Gómez in the Intermediate category (Cadets), after an interesting duel with the talented local runner Matías Urzua, national champion of Chile, who gave him the fight during the first two turns of the circuit before Camilo imposed a devastating step to arrive alone to finish with an advantage of almost a minute, which left him in the top 10 overall of the best track times with a final turn of 13min16sec.

Hugo Andrés Rodríguez won an important bronze medal in this same category and Julián Rodríguez a valuable fourth place among the 28 runners who started in this category of runners of 15 and 16 years of age.

“A very outstanding performance for our athletes, who fully represented our team and Colombia, thus fulfilling the objective of holding a high level international competition, prior to the Pan American Championship to be held the first week of April in the city of Aguascalientes Mexico “pointed out the Team Manager of Specialized-Tugó-SRAM, Pablo Mazuera. (mundociclistico.com)