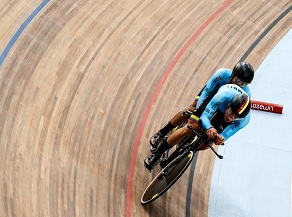 This day, had the participation of Marlon Pérez and Javier Serna in Tandem, as well as Edwin Matiz (C5) and Alejandro Perea (C3), in the men’s time trial. And Paula Ossa (C5) and Carolina Munevar (C2) in the 500 meters women’s time trial.

In Tandem, the traders Marlon Pérez and Javier Serna, were the first to celebrate after obtaining the gold medal in the individual chase 4,000 meters, while the Canadians Taylor and Davidson, remained with the silver medal. The bronze went to the Argentines Maximiliano Gómez and Tolosa.

The great news also for the coffee pair, was the imposition of the Para-American record with a time of 4: 22,551, about 4: 23,933 that the Canadian couple, Veal and Chalifour had.

For its part, in the C1-5 time trial, gold and silver went to the Americans, Joseph Berenyi and Christopher Murphy, while bronze went to the Colombian Edwin Martíz. In addition, Alejandro Perea, from Antioquia, finished in fifth place.

The women’s 500-5 time trial C1-5, also had coffee participation, Paula Ossa and Daniela Munevar, finished in fourth and fifth place, respectively. The gold went to the American Samantha Bosco, the silver to Mariela Delgado and the bronze to Clara Brown.

Tomorrow, the competition will end on the track and we will have the representation with: Paula Ossa, Alejandro Perea, Carolina Munevar, Diego Dueñas, Carlos Vargas, Marlon Pérez and Javier Serna.

The road tests will be held on August 30 and September 1. (Fedeciclismo Colombia)