GREAT SHOW AT THE OPENING OF THE 2019 TRACK INTERNATIONAL TOURNAMENT 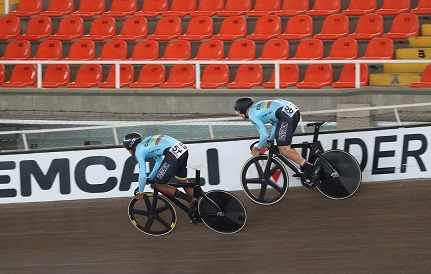 BOGOTÁ. The Colombian Selection Manzana Postobon had a great start in the International UCI Track Event in Ciudad de Cali, categories C1 and C2, by winning in the six finals played at the Alcides Nieto Patiño Velodrome.

The Valle del Cauca Kevin Santiago Quintero and the Santandereana Martha Bayona, both based in Medellín, prevailed in Speed ​​and Keirin, being the most outstanding athletes in the criollo booty.

Quintero beat his teammate Santiago Ramírez in the final of the Speed, and in the qualifying rounds of the morning he managed a tiempazo of 9,979 seconds. In the Keirin was escorted by the Brazilian Kacio Freitas and Ramirez.

“We arrived in a very good way, the result was very positive, in the morning at 200 meters fabulous and I’m feeling good on the track,” said the Palmira born.

For her part, Bayona said about her triumphs: “Very happy, I trained to give the best of me, with my trainer John Jaime González, who always brings us a very good plan and here in the tests he sees. The idea is to be in first place also internationally and each career that is done is preparation for us. Very grateful to the public of Cali and we always like to compete in the velodrome, because it is the most beautiful “.

Another of the victories of the national team was achieved by the Antioquenos Fernando Gaviria and Juan Esteban Arango in the Mádison with 28 points, surpassing the pairs from Mexico (Ignacio Sanabria-José Alfredo Aguirre, 27) and Chile (Antonio Cabrera-Felipe Peñaloza, 12).

Likewise, the Antioquia rider was second on Monday at the Omnium (behind Carlos Andrés Tobón-Selección Colombia).

In the female category, Colombian couples also shone. On the one hand, Jessica Parra and Lina Marcela Hernández, and on the other, Lina Mabel Rojas and Laura Sofía Castillo, companions of the quartet with Hernández in the World Youth Championship played in Italy. Now, as part of the new process in the elite category, they managed to impose themselves on the novel test included in the Olympic calendar.