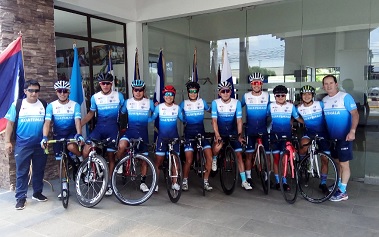 GUATEMALA. The National Team is getting ready to compete in the 34th edition of the Pan American Elite Route, Ladies and U23 Championship, to be held in the city of Pachuca de Soto, Hidalgo, Mexico from April 29 to May 5.

Manuel Rodas has had a positive record in the individual time trial modality of the Pan-American championships. In 2015 he won the Silver medal in León, Guanajuato; in 2017 he won a bronze medal in Santo Domingo, Dominican Republic; and in 2018, in San Juan, Argentina took bronze medal.

The list is complemented by Brayan Ríos, Julio Padilla, Alfredo Ajpacajá, Mardoqueo Vásquez and Dorian Monterroso. In the Under-23 category, Daniel Borón and Henry Sam, while Gabriela Soto will be in the women’s category.

It has confirmed the participation of 26 national teams of America, including powers such as Argentina, Brazil, Canada, Chile, Colombia, Costa Rica, Cuba, the United States, Honduras, Peru, Venezuela, Guatemala and Mexico, among other countries.

The National Team of Guatemala will travel on Monday, April 29. The first to compete will be Henry Sam, on Wednesday May 1 at 11 in the morning in the individual time trial of 33 kilometers, in a circuit of 3 laps in Rio de La Avenidas. The same day will be Manuel Rodas and Bryan Ríos in the elite time trial at 13 o’clock. It will be 4 laps for a total of 44 kilometers.

On Friday, May 3 at 3 pm, Gabriela Soto will compete in the road test, on a 6 laps circuit in Ciudad del Conocimiento, with 88.2 kilometers. On Saturday, May 4 at 10 am, Daniel Borón and Henry Sam will compete, with a 140-kilometer start from Pachuca to Ixmiquilpan for the Under-23 category.

The contest ends with the elite route test on Sunday, May 5 at 10 am, with the participation of auction specialists Julio Padilla, Bryan Rios, Alfredo Ajpacajá and Dorian Monterroso. With them Manuel Rodas and Mardoqueo Vásquez, who perform very well in all types of terrain. (Nery Ajsivinac / Press F.G.C)