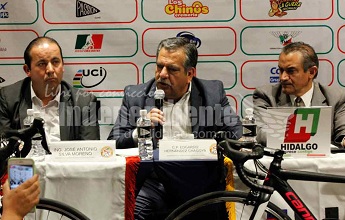 PACHUCA, HIDALGO. Hidalgo will host the Pan American Road Cycling Championship 2019 for the first time, from April 29 to May 5.

This event is of high relevance in the American continent, since around 230 riders from 20 countries will compete, who will seek to qualify for the Olympic Games (JO) of Tokyo 2020, highlighting the cyclists Francisco Lara and Leonel Palma.

The fair will be attended by delegations from Argentina, Canada, Colombia, Costa Rica, United States, among others, being a competition organized by R & R Bike Cycle and the Hidalgo Association of Cycling, endorsed by the International Cycling Union (UCI), the Pan-American confederation (Copaci) and the Mexican federation of discipline (Femeci).

The circuit will have a distance of 106.56 kilometers; the riders will leave Pachuca and will pass through San Agustín Tlaxiaca, Actopan, San Salvador, among other municipalities, to reach the finish line in Ixmiquilpan. It will have the male and female branches in the elite and sub23 categories.

There will also be a circuit against the clock, which will be developed on the River of the Avenues, in Pachuca, with a distance of 11.30 kilometers.

While this weekend will be carried out the national selective to conform to the team that will represent Mexico in the competition. (elindependientedehidalgo.com.mx)