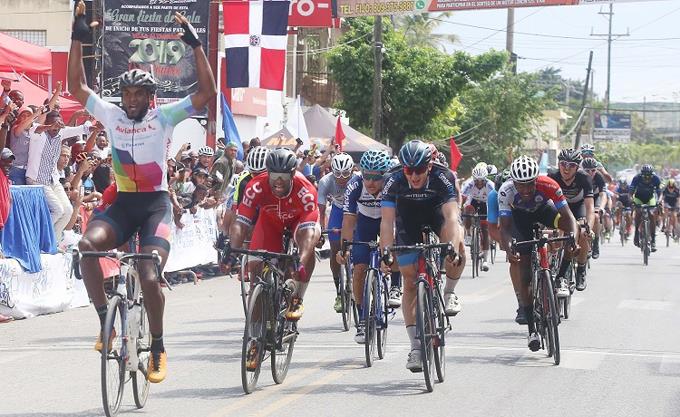 SANTO DOMINGO. Just 24 hours after Jean Carlos Crispín won the victory in his native La Romana, Ogando achieved the great honor of triumphing in the province that saw him born, Villa Altagracia.

Ogando, a brilliant runner on the track, showed great sprint to win the victory in the third stage of the 40th edition of the Vuelta Ciclista Independencia, contest that included a circuit of 149.5 kilometers (13 laps) in this demarcation.

“Villano”, as is known in the field of cycling, lashed out with strength in an arrival that included about 25 riders, a fact that was presaged would occur after the previous round the peloton pass compact by the goal.

The representative of arcoíris reached what was close to reaching last year, which had arrived in the second place in the circuit held in this city and this Wednesday in celebration of another anniversary of National Independence could provide this great Victory to his people.

“This has been great for me, a triumph represents a lot and of course I dedicate it to all those people who have always given me their great appreciation and closely followed my career,” said an
euphoric Ogando, after being carried on the shoulders by several followers, who toured several corners with him.

The victory on Tuesday Crispin, in the Roman and Ogando the next day in Villa Altagracia marks the first time in the 40 years of history of the Tour of Cycling that two riders take possession of their own land in successive dates.

After completing the third stage, Robinson Chalapud, Team Medellín continues in the first position to accumulate 9:04:00 hours. The second place is occupied by Oscar Sevilla at 46 seconds, Bakker is third at 49; Alonso Gamero is fourth at 49 seconds, while Ismael Sánchez is the best ranked Dominican and is 53 seconds behind.

Meanwhile, the flying goals were conquered by Capellán (ECC Santiago), Cristhoper Jurado, from the Central American team was second and the third corresponded to Weimar Roldán, from the Medellín team.

The second was achieved by Máximo Rojas (Team Venezuela), Reyes and William Guzmán, both of Inteja Imca Ridea took second and third places. The third was obtained by Merán, Reyes was second and Koontz (Marc Pro USA) was third.

The day of this Thursday, the fourth of the turn will include the route Santo Domingo to reach Monte Plata, a journey of 122.5 kilometers. (ciclismo.com.co / listindiario.com)