KENDRIC CLAVIER WINS THE SECOND STAGE OF THE PANAMA TOUR 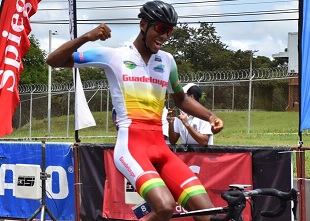 CITY OF PANAMA. A total of 95 riders make up the platoon that will be traveling 102 kilometers on Wednesday, between the areas of Santiago-Divisa-Parita-Chitré and Puerto de Guararé in the province of Los Santos.

Kendric Clavier, of the Guadalupe team, had enough strength to finish off and win the second stage of the 2019 Panama Tour; while the Colombian Albeiro Suaza, of the Rali-Claro team, continues as leader.

In addition to Fabricio Ferrari, a Uruguayan cyclist, a professional currently running in Spain; José Antonio Alarcón, Venezuelan cyclist, internationally recognized and favorite for the Tour; and Jaime Rivas, Venezuelan cyclist who despite being a Master, is also a favorite, since it is at the level of Elite cyclists.

Emer Samudio, representative and technical director of the Panamanian Cycling Federation, who highlighted the high level of the running teams that have excellent athletes and said that, as a cycling entity, “we are the only sport classified for the Olympic games in Tokyo” he remembered.

He recognized the efforts of the private company and Vicente Carretero, of Rali Store, which has always longed to institute cycling as an educational sport, which provides facilities, through federative management, so that children and youth teams enjoy a high degree of studies that allow them to face today’s society.

The athletes will travel 790 kilometers divided into seven stages that will end on October 13 in the town of Cerro Azul (east of the capital of the country), with 17 flying goals and 16 mountain awards in dispute. (press.com)