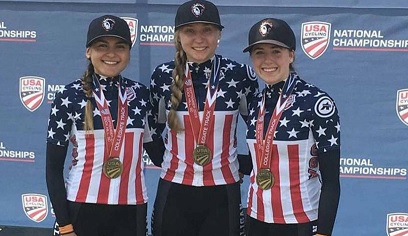 BOGOTÁ. Colombian cyclist Manuela Escobar became a national champion in team chase mode on track cycling this Thursday, but in the United States.

Escobar, 22 years old and competing for Milligan College, won with his teammates Megan Jastrab and Gracie Pendleton with a time of 5: 07.505.

The Colombian also competed in the 200 meter sprint test in which she finished in box 20 in the qualifying round with a time of 14,170. First was Olivia Ray of Savannah College with 11,850, second was Megan Jastrab of Milligan College with 12,321 and the third league was occupied by Hannah Mcdade with 12,653.

Manuela Escobar is one of the many representatives that Colombia has internationally when working in the United States road cycling with the Milligan Cycling team.

This year, Escobar competed in the Winston Salem Cycling Classic of category 1.1 which had as a starting and final place in Winston -Salem after 96.56 kilometers, the manizalita did not finish the test where the best Colombian was Jéssica Parra who finished 12.

Escobar was runner-up of the Vuelta del Futuro in Colombia in 2015. The Colombian competes for the Coldeportes Zenú team and for the representative of the Bolivar department at the local level. (rcnradio.com)