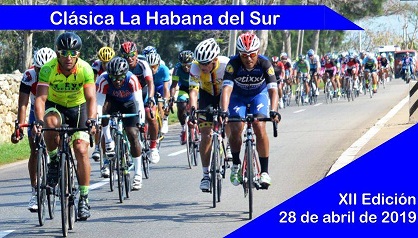 HAVANA. La Clásica La Habana del Sur is one of the most emblematic races of Cuban master cycling. This year, 2019, the XII edition will be held on April 28.

This is an event that changes the layout every year, but guarantees a circuit where the average mountain is the protagonist. La Clásica La Habana del Sur is one of the six races that can be scored to define the National Master Cycling Champion of Cuba.

Another interesting point of the competition is that part of the Hospital Cardiocentro Infantil William Soler, where the day before the competition is a donation of toys to the children admitted, an emotional and humanitarian act to which all the cyclists participating in the race are added, as well as judges, directors and fans of the cycling family in Cuba.

This year will have as a novelty that will add another category in competition, the Master E, for cyclists over 70 years. Emblematic figures of national road cycling such as Raúl Locomotive Vázquez, among others, will fight to win in a 65 km route, identical to the one made by the categories: C and D.

Categories A and B, which have a distance of 100 km, will climb hills known as El Cacahual, Las Abejas, El Plátano and El Radales. There will be a flying goal in San Antonio de las Vegas, while two mountain prizes will be added in El Cacahual and El Plátano. The final goal will be at the Lenin Park rodeo.

Cuba Aventuras offers through our website, ciclismoencuba.com, tour packages that include march to Las Terrazas, city tour through Old Havana with dinner included and inscription to the Classical La Habana del Sur 2019. Check the program.

Participate in this 2019 edition more than one hundred Cuban master cyclists where the provinces of Ciego de Ávila, Matanzas, Mayabeque, Artemisa and Havana stand out. The participation of foreign cyclists is also expected. (Willy Hierro Caveda)