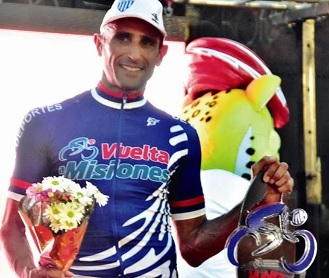 MISSIONS, ARGENTINA. The Vuelta a Misiones had its coronation on this Sunday’s day with a spectacular setting on Costanera de Posadas Avenue and it was Matías Médici, from the Avaí team in Florianópolis (Brazil), who took the celebrations in this return of the competition that He knew how to be the protagonist of the local sport between the 50’s and 60’s and that, between Friday and Sunday, he was reborn again.

Médici, who represented the Brazilian team on the occasion, is a member of the Argentine cycling team and during the three days fought hard to keep the title.

The Buenos Aires, completed the four stages with a total of 7h51m31s, escorted by Agustín Moreira (Cerro Largo) with 7h52m01s and Mauro Richeze (Grupo Safac) completed the podium with 7h52m17s.

Médici came out as a favorite and his credentials gave him the approval, since he represented Argentina in the Beijing 2008 Olympic Games. In addition, he is a time trial specialist, he was Argentine champion three times, with medals in the South American and Pan American Games, among others So many joys in his career.

Vuelta had four stages, the first, on Friday, that joined Posadas, with Leandro N. Alem, won by Jorge Giacinti, of the Uruguayan Cycling Club of Cerro Largo, after 97.5 kilometers.

The second brought back from Alem to the capital of the province on Saturday, passing through Oberá, Cerro Azul, Cerro Corá and Candelaria, won by Mauro Richeze.

And in the third stage of chrono it was in the Bypass Arco-Rotonda Route 213, it remained in the hands of Agustín Moreira (Cerro Largo Cycling Club). In the closing, in the afternoon hours of yesterday, Ramón Molina Espinoza, of Shania competition, was responsible for taking the excitement in the 4th stage.

The organizers, accompanied by the Ministry of Sports, made this return a party on the missionary routes and the strawberry of dessert had the excitement awaited by the majestic Paraná River. (elterritorio.com.ar)