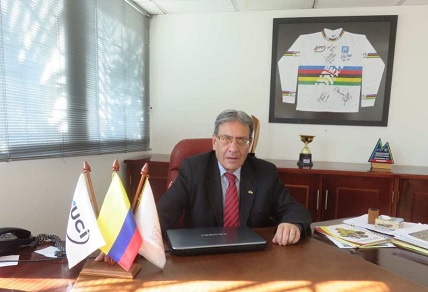 BOGOTÁ. The buyacense leader, Jorge Mauricio Vargas Carreño, a native of the municipality of Santa Rosa de Viterbo, has been appointed as the new president of the governing body of Colombian cycling, after the resignation of Jorge Ovidio González Longas, who had announced since July His retirement due to health issues.

This Thursday, at an extraordinary meeting of the executive committee of Fedeciclismo, González Longas officially gave up his position to give way to the appointment of Vargas Carreño, leader of extensive and recognized trajectory that will assume command as the main head until 2021, the year in which he concludes the current mandate and the elections will be held.

With more than 40 years linked to cycling, the Boyacense lawyer has been one of the most recognized pillars in the national leadership, opening his way in the field of the hand of Alfonso Salamanca, founding the team of the Boyacá Lottery.

In the 80s, it was the right hand of his countryman Miguel Ángel Bermúdez as manager of the institution at a time of great boom for national cycling with heroes of the time such as Lucho Herrera, Fabio Parra, Martín Ramírez, Alfonso Flórez, Rafael Acevedo and José Patrocinio Jiménez, among other historical who opened the way in European cycling as part of the great races of the UCI international calendar.

At 68, the Santarroseño – who also served as manager of the Licorera de Boyacá and Secretary of the Treasury in his department – arrives to assume the most important position of the Colombian cycling leadership, accompanied by Hernando Zuluaga Aristizábal and Rodolfo Palomino, as First and second vice president, respectively.

The executive committee is completed by Agustín Moreno Aristizábal (from second vice president to vocal), Orlando Arroyo Blanco, Carlos Enrique Arango and Carlos Mario Pajón, who enters as a new member of the table before the definitive resignation of Jorge Ovidio González. (Fedeciclismo Colombia)

The Pan American Cycling Confederation (COPACI), headed by its president José Manuel Peláez, expresses his most enthusiastic recognition to Jorge Mauricio Vargas Carreño, elected Thursday as the new president of the Colombian Cycling Federation, replacing the experienced leader Jorge Ovidio González Longas, who submitted his resignation due to health problems.

In his congratulatory message, Peláez recognizes the great work for many years of González Longas, who interchangeably served in almost all responsibilities within the governing body of Colombian cycling.

“Without a doubt, there will be a before and after the period in which our beloved, Jorge Ovidio, served as head of the Colombian Cycling Federation. Passion, total dedication, responsibility and leadership efficiency, were his most notable virtues to take to cycling Colombian at the top of world sport, “says Peláez in his message of recognition.

For his part, the vice president of the International Cycling Union (UCI), referring to the new president of the Colombian federation, acknowledged that, Jorge Mauricio Vargas, has all the powers and experience sufficient to continue promoting the development of cycling in his country . “Jorge Mauricio is also very recognized in Colombian sport and in the cycling field of the continent, since he has dedicated a large part of his life to work for our sport. To him, his vice-presidents and the executive as a whole, we ratify that always they will have the support of COPACI and the international cycling family, “concludes Peláez’s message. (Copaci Press)