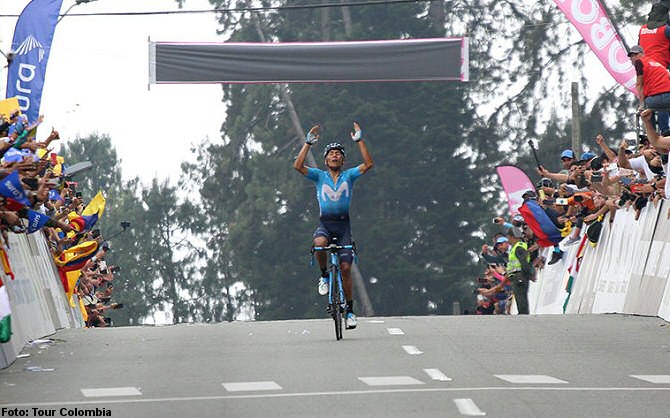 BOGOTÁ. The Tour Colombia 2.1 fell on Sunday the curtain of its second edition with a stage that had everything to decide and in which the mountain put each runner in place with the ascent to Alto de Las Palmas, where the Colombian Nairo Quintana won (Movistar) and his compatriot Miguel Ángel López (Astana) was crowned champion.

The sixth and last stage was held over a route of 173.8 kilometers that began in the town of El Retiro to the summit of Alto de Las Palmas, in Medellín, located 2,550 meters above sea level.

For the final, the best was reserved, with a multicolored party and the presence of hundreds of spectators, who enjoyed the queen stage, which came as candidates for the title `Superman’ López, Iván Ramiro Sosa (Sky) and Daniel Martínez (Education First).

The stage was very fast in its first kilometers with a flight formed by Diego Ochoa (Manzana Postobón), Edwin Ávila (Israel Cycling Academy), Wilmar Paredes (Manzana Postobón) and Álex Cano (Coldeportes Zenú), which came to be more than 3 minutes of the peloton, from which he threw for a long time the Deceuninck-Quick Step with the intention of retaining the orange shirt of French leader Julian Alaphillipe.

The group was compacted and the climb began to filter runners, in a real struggle to survive in which Alaphillipe and the Luxembourgian Bob Jungels of the Deceuninck-Quick Step, winners of stages in the coffee test failed to hold.

Movistar launched its attack with Winner Anacona, recent champion in the Vuelta a San Juan, which was joined by `Superman’ López to make a difference to Martinez and win the Tour, an achievement that was not easy to materialize with the entry on the scene of Ivan Sosa, in the company of his teammate Egan Bernal, defender of the title obtained last year by Sky.

The appearance of Nairo, with splendid attacks, shook the auction five kilometers from the end, where he expected a crowd of euphoric compatriots, who saw him recover from a fall caused by an amateur at a time of high tension.

With Bernal and Lopez in the lead, and without Martinez and Rigoberto Urán (Education First) as a threat, Movistar’s head of ranks regained strength to give entrance to his final attack, while Sosa and `Superman’ initiated a vibrant definition of the title , climbing a wall where they exchanged some words.

Nairo undertook his final break and crossed the finish line alone with a time of 3 hours, 57 minutes and 19 seconds, while 8 seconds came Sosa and Lopez, who also was crowned champion of the mountain.

With those times, `Superman’ confirmed his title after looming smartly on the mountain in the fifth stage, in La Union, where he set the stage to win the Tour Colombia in Las Palmas, where the awards were entertained by singers Carlos Vives and Gusi, in the company of the protagonists of the day, Urán and Fernando Gaviria (UAE Emirates).

Lopez, 25, finished first at the conclusion of the six stages with a time of 18 hours, 38 minutes and 32 seconds, which snatched the orange leader jersey to Alaphilippe.

In the general classification, Sosa was 4 seconds behind the Astana runner, while Daniel Martínez was second to 42, followed by Bernal at 54 and Quintana at 1 minute and 4 seconds. (esciclismo.com)