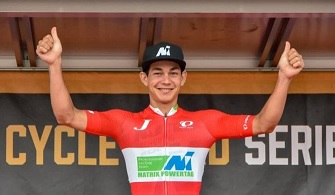 CARACAS. The Venezuelan Cycling Federation announced that it will be Orluis Aular, 23, the Venezuelan cyclist who will run on the men’s route of the Tokyo 2020 Olympic Games.

Venezuela won the country quota in this test thanks, in part, to the excellent season of the rider who achieved 19 victories this year.

Aular sealed the country’s Olympic classification on October 20, when it was placed in the tenth space of the Japan Cup Cycle Road Race, 2 minutes 31 seconds behind the winner, the Dutchman Bauke Mollema.

He added 35 points that ratified Venezuela in the 41st position in the ranking of nations with 947 units.

“This is something very important and very beautiful in my career. I have had an impressive year, full of many good things. Knowing Japanese cycling well is a plus to run the Olympics next year, ”said Aular from Japan, where he developed his sports career this year.

In the Asian country he played with the Matrix Power Tag, champion team of the Japan Pro Tour. In this test he was the leader of the individual general classification.

This earned him to be one of the most important Latin American signings in the European circuit for the 2020-2021 sapphires. He agreed for two years with the Spanish Pro Continental UCI Spanish Caja Rural team.

The Yaracuyan won seven wins of 22 possible that make up the Japan Pro Tour, which gave him the title on Asian soil. He earned a total of 157 points out of the 451 he accumulated in his personal account in 2019. These contributed to the 947 that Venezuela totaled to be ranked 41st in the ranking of nations to Tokyo 2020. (elnacional.com)