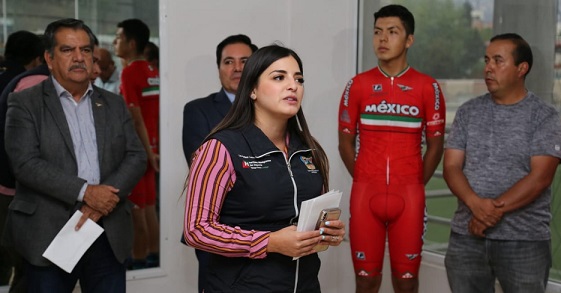 PACHUCA DE SOTO. Although the rain was present in the city of Pachuca on April 30, the inauguration of the Pan-American Road Cycling Championship was held at the facilities of the Mexican Revolution Sports Complex, where national and international cycling authorities were present.

This Pan-American competition will award qualification points to the Olympic Games of Tokyo 2020, so that representatives of 25 countries will compete for the top positions in the race to better access the Olympic fair to be held in the country of the rising sun next year, informed the president of the Pan-American Cycling Confederation, José Manuel Peláez Rodríguez.

Peláez Rodríguez also thanked the Hidalgo government and sports authorities for organizing this fair in only five months, which generated a good response from the Pan-American countries by adding 25 nations to contest the tests in the elite and U23 categories, detailed . “We want to recognize the courage that the state of Hidalgo has to organize this event in a few months, only five months, we are very happy because the Pan-American Cycling community is responding, we have 25 countries that since this first of May sports results are disputed because they are points to qualify for the Tokyo 2020 Olympics, “he reiterated.

He also informed that at the start of these competitions will be present the president of the International Cycling Union (UCI), David Lappartient, to judge the best results and thus award the UCI points to get the pass to the Olympics.

For his part, the president of the Mexican Cycling Federation (FMC), Edgardo Hernández Chagoya, said that it is an honor to be in Hidalgo after so many events that have been held in this state, besides that it is recognized that in the Mexican national team cycling have four representatives of the entity of Hidalgo, which reflects the talent of the athletes with which the state has and who are expected to have a great performance in the joust. “We have four representatives of a state, which is easy but it is very difficult to achieve, it is a pride to have athletes of this magnitude and hopefully it is one of the best we have had and I reiterate the gratitude to the authorities to celebrate this contest,” he said. .

Finally the general director of the Hidalguense Institute of Sport (Inhide), Fátima Baños Pérez, said that hosting an event of this size in Hidalgo is to recognize the work that has been done in the Inhide, as well as in sports associations to promote this sport in the entity and in the country. He also noted that although the weather affected the celebration of the inauguration, this situation will not be repeated in the tests that will begin this May Day, since it is guaranteed that the authorities have done what is necessary to guarantee that the Route tests as programmed by the FMC.

“Today we had this weather situation and some athletes and federations did not move because of the weather, but all the activities will be carried out in a normal way, we are proud that within the Mexican team there are four Hidalgo’s, among which Fernando Islas stand out and Leonel Palma and we expect a lot from them, “he concluded. The first test to be developed in this Pan American fair will be Against Clock, which will be based on the circuit of the River of the Avenues, which will start at 10 am with the competition of the elite and U23 categories in the female branch; shortly after will give way to the competitions of the same category in the male branch. The fair will end on May 5 with the route competition in the cycling circuit of the City of Knowledge and Culture of Pachuca. (millennium.com)