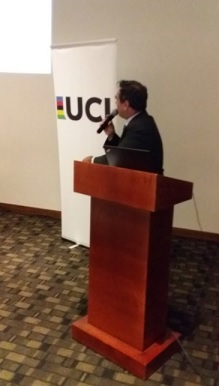 PACHUCA, HIDALGO. In the agenda of the UCI Platform, the intervention of the Brazilian, Jose Luiz Vasconcellos, who serves as president of the Pan-American Para-cycling Commission, a modality that points to growth in the American continent, was relevant.

Vasconcellos spoke of the priority that COPACI has given to the promotion of Paracycling, especially to the extent of its practice in the region, because until now only in countries like Colombia and Brazil is where a greater organization of organized championships has been shown and the presence of its athletes has been seen in world championships.

The also president of the Brazilian Cycling Confederation explained to the delegates present at the Platform the interest of the International Cycling Union to enhance the practice of Paracycling, contained in the 2022 Agenda of the agent of the world body, David Lappartient.

Vasconcellos also referred to the different modalities that appear in the Paralympics program in world championships, at the same time he gave an account of the location of the countries of the continent in the UCI ranking and the results obtained by athletes from Brazil and Colombia in the world championships.

Finally, Vasconcellos assured that in order to develop the Paracycling, support is needed in each country from the sports authorities in the hands of the national federations, which is possible in a continent that has extraordinary potential. (Copaci Press).