PERU: ROYNER NAVARRO IS READY TO TOUR OF URUGUAY 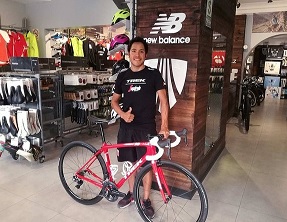 LIMa. After his outstanding participation in the Vuelta San Juan-Argentina, the same that took place a few weeks ago, the Ayacucho rider Royner Navarro is preparing to face the Vuelta a Uruguay, which will take place from April 12 to 21.

For now he is training in the high performance center of Arequipa, the day is from Tuesday to Sunday. After Uruguay he will travel to the Pan-American Championship of Mexico.

“The return to Uruguay we will take as a preparatory with a view to the Pan-American Championship of Mexico, we hope to give the stature in this last race”, said Navarro.

In Uruguay, there will be about 160 cyclists in competition and in Mexico there will be six representatives per country, that is, there will be 32 athletes. “I know it will be a bit difficult because of the high level in those countries, but I am striving to improve and leave the name of Peru on high.”

He also added that in all the competitions that he participated and will participate, he is always looking for results, winning podiums and medals.

On the other hand, another one of the local athletes that is giving the talk is the judo player Brillith Gamarra, who has been winning the silver medal at the Pan American Open Lima 2019.

This result was highlighted by the athlete in their social networks, also, members of the Peruvian Judo Federation also highlighted the feat achieved. In this short time the ayacuchana has become one of the strong cards of Peru in the discipline of judo in any international championship. Recall that Gamarra started in Ayacucho. (diariocorreo.pe)