THE CUBAN CYCLING IS DECLARED READY FOR LIMA 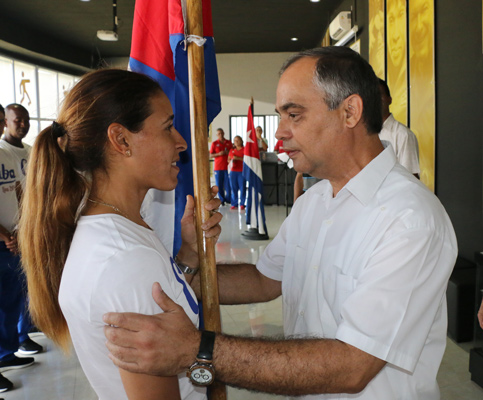 HAVANA. The Cuban Sports Hall, located in the Coliseum of the Sports City, today hosted the Cycling Dignity Asset towards the XVIII Pan American Games in Lima.

The main exponents of that discipline committed themselves to fight to fulfill the purposes that lead to the main competition of the year for Cuban sports. Lisandra Guerra spoke on behalf of the athletes …

“We will face the most important challenge at this stage. We are confident that we will put our motto in Lima at the top. Always for More, “he said.

Iraida García delivered the book with the commitment, signed by all the competitors and technicians, to Raúl Fornés Valenciano, first vice president of Inder, who reciprocated the gesture by awarding the pennant of Deporte Listo.

Arlenis Sierra received from the hands of Osvaldo Vento Montiller, holder of the Inder, the flag that will defend in the continental appointment.

“We have as goal and purpose to obtain the highest possible result to be able to place Cuba in the best position at the end of the competition,” said the Pan-American champion of the route in Guadalajara 2011.

Pablo Arturo Campins, national commissioner of this discipline, also spoke at the event.

«Today our commitment to raise the name of Cuba becomes giant. We are committed to fight from our line of combat that is sport. Today we say we are going for more, “he said.

The artistic moment of the activity was in charge of the troubadour Danilo Vázquez. (jit.cu)