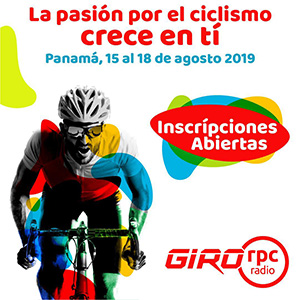 CITY OF PANAMA. The Giro RPC Radio 2019 will develop a new edition from August 15 to 18 in Panama, according to Rodolfo Jurado Gadea, Senior Manager of the Medcon Group and one of the organizers of the race.

Speaking to this edition, Jurado said that this year’s RPC “is part of the official events in Panama, commemorating the 500th anniversary of the city’s founding.”

In this edition of the attractive cycling competition, the organizers expect teams from some 23 countries, which will compete in the Master A, B and C categories, in addition to the attraction that women will also compete.

Jury announced that a bag will be distributed in cash for over 25 thousand dollars, while four exciting stages will be broadcast on television and streaming.

The organizers of Giro RPC 2019 are adjusting all the details so that the transport from the airport to the hotels and the one that will accompany the route in the stages is assured. Breakfast, meals and hydration are also guaranteed.

Those interested in competing in the RPC 2019 Giro can obtain more information on the website: www.girorpc.com or on social networks. They can also communicate through the email girorpcradio@medcom.com.pa and the WhatsApp number: + 507 62528264