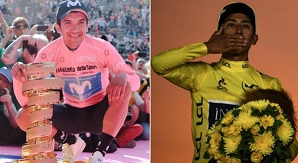 QUITO. The Colombian cyclist Egan Bernal and the Ecuadorian Richard Carapaz have two things in common: they broke history in their countries to become 2019 champions of one of the three great tests of world cycling and keep heartfelt stories of self-improvement.

In the demanding world cycling, it has been the European athletes who have set the pace of the pedaling of the great competitions, but what Carapaz and Bernal achieved is about to change the history of cycling. Based on effort, dedication and a dose of suffering they managed to inscribe their names with gold letters.

Before the feat of Richard Carapaz in the Giro, only a Latin American cyclist had managed to win in Italy: Nairo Quintana (2014). Since that year, the Spanish Alberto Contador (2015), the Italian Vincenzo Nibali (2016), the Dutch Tom Dumoulin (2017) and the British Chris Froome (2018) returned to Europe the hegemony of the test.

But despite this “domain” a ‘Locomotive’ born in Carchi whistled hard and burst to leave behind Nibali and Roglic, considered the favorites to win the Giro 2019. Egan Bernal, meanwhile, is the first South American to put end to European dominance of the Tour, after six editions won by British cyclists.

At the beginning of the test, the eyes were on Geraint Thomas, a teammate of the Colombian in Team Ineos, who in the end stayed at 1: 11 “of the young leader, when the last stage was still to be played. Egan Bernal, with 22 years and 197 days, he has been at the top and has managed to savor the glory of a career that still has many years to come.While Richard Carapaz, with 26 years old when he wore the ‘pink maglia’ of the Giro, He wants more.Movistar Team, the team with which La Vuelta a España will run this August, has lamented that the Ecuadorian will not renew the contract.Everything indicates that ‘La Locomotora del Carchi’ will wear the Team Ineos ‘jersey’, which intends , to shoot in 2020 with Chris Froome, Geraint Thomas and Egan Bernal on European routes. (elcomercio.com)